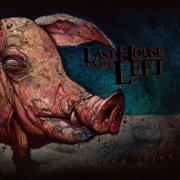 Last House On The Left

Among Flies is Last House On The Left’s debut album with Ferret Records. LHOTL have influenced several bands with the black/death/core sound and I was stoked to hear what the originators LHOTL had in store. Well to my dismay, I was very let down by this album. With bands like Anima, Abigail Williams, And Hell Followed With, and Rose Funeral, LHOTL just can’t compete. There was so much good hype surrounding this record and I feel it just falls terribly short.

The CD was not bad per se; however I was just expecting LHOTL to take all those aforementioned bands and booty slap them and show them how it’s done! Not the case at all. The album is very flat sounding; it tries to build up but fails to offer that “wow factor.” Moreover, the songs are just way too long for me to get into the band. Now don’t get me wrong, I don’t mind long epic songs like Between The Buried And Me however, LHOTL drags the songs on for too long and seems to repeat some of the same riffs again and again.

My favorite song on the CD is “Night’s Ardor” which has a nice black metalish piano intro, some good guitar riffs, solos and a strange breakdown where the vocals are put through a phaser. Yet at 3:43 into the song the vocals in the song skip… like the singer coughed or something and the producer didn’t take it out.

Overall, I was let down. LHOTL has to do something drastic… perhaps shorter songs, less repetition, maybe make the breakdowns more bone-crushing, add in some bass drops and perhaps try and make the songs more melodic. Good luck. 6.4 Pig Heads out of 10.  [ END ]