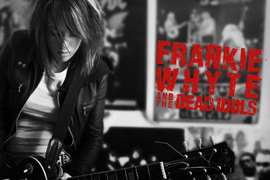 Although some may beg to differ, the city of Toronto, Ontario has developed a very healthy indie rock scene over the last decade or so. Tons of bands have come and gone while others have gone on to bigger and better things. One band that seems like it’s destined to go on to a lengthy and popular career is Frankie Whyte and the Dead Idols. Though the group has not been together for a very long time, it has quickly become one of the biggest buzz bands in the Toronto and surrounding scene. As the name of the band clearly states, the group is led by Frankie Whyte, a twenty-one year old young woman who does it all. Not only does she sing lead, she also plays lead and rhythm guitar and even gets in on the drum kit once in a while.

Being the lead singer of a rock group is not a big stretch for Frankie as music has almost always been a part of her life. Music was part of her home life and by the age of nine she had gotten her first drum kit and then was playing guitar by eleven. Eventually, this led to playing in bands and developing a sound for her music. Even though it is somewhat unique in itself, the sound she settled on could be interpreted as a throwback to 1980’s glam rock and metal. Some have even referred to Frankie as a modern day Joan Jett and the band’s look and feel has been compared to Kiss and Motley Crue.

While it often takes years for most bands to actually put out any type of recorded music, Frankie Whyte and the Dead Idols have already released a debut EP and are currently working on a debut, full-length LP. To help produce her debut album, Frankie was fortunate enough to secure the services of none other than Duncan Coutts, bass player of the very popular Canadian rock group Our Lady Peace. Believe it or not, Frankie met Coutts at her parent’s house when she was living there as a sixteen year old. After meeting, Frankie recorded some songs and guitar riffs at home before calling Coutts up to see if he’d be so kind as to take a listen. One thing led to another and Coutts ended up taking on the role of producer for the band’s debut record.

Although most of the album was recorded all by Frankie and Coutts, she has put together a kick ass live band to accompany her on the road. Frankie Whyte and the Dead Idols is now a five piece glam rock outfit which in their short time together have become known for some very rocking live shows. The band will be playing in and around the greater Toronto area throughout the winter with shows scheduled in Burlington, Hamilton and Brampton. Check out the band’s MySpace for the latest dates to check out one of Toronto’s finest up and coming rock bands.  [ END ]