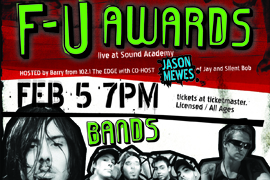 On February 5th, 2009, Punkorama hosts, Barry Taylor & JD are joining forces with the legendary Jason Mewes (of Jay and Silent Bob fame) to bring music, awards, skateboarding, and more to the Sound Academy!! Party jamming performances by ANDREW WK, THE FLATLINERS, DIE MANNIQUIN, THE ARTIST LIFE, KINGDOMS, and THE EXPOS, professional skate demos, video game competitions (fans vs. hosts), Andrew WK and Jason Mewes look a like contest and so much more. And of course, this wouldn’t be an awards show without some awards.