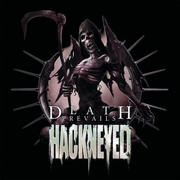 German Death Metal, is there any better kind of Death Metal? I think not! Death Prevails are a great addition to not only the German Death Metal scene, but to metal music in general. And I am not the only one to think so; their debut album Hackneyed has been creating a lot of publicity for the increasingly popular band.

I’m going to be sincere and honest during the course of this review. I am not a big Death Metal fan, I do not know a whole lot about it, and usually it all sounds the same to me. However, when I clicked the play button on Hackneyed and a couple tracks played through, I found myself getting right into the music. I am not a headbanger of any sort per se (unless inspired by the greatest movie of all time: Wayne’s World), yet there were a couple times when I caught myself going along with the beat with my own crazy head-banging ways.

“Bone Grinder” is the second last track on the album and is a song that I found extremely entertaining mainly due to the drumming. The drum rolls and riffs at some points are so insanely fast; I found myself trying to do the good old-fashion air double-kick, I realised that the pace is much to fast and there was no way in hell that I could last.

One last note which has nothing to do with the album itself is that the members of the band are all very young. Death Prevails’ youngest member is 14, and the average age is 16. Now are you impressed? I fucking better hope so. Great debut, and a lot more to come. Party on!  [ END ]