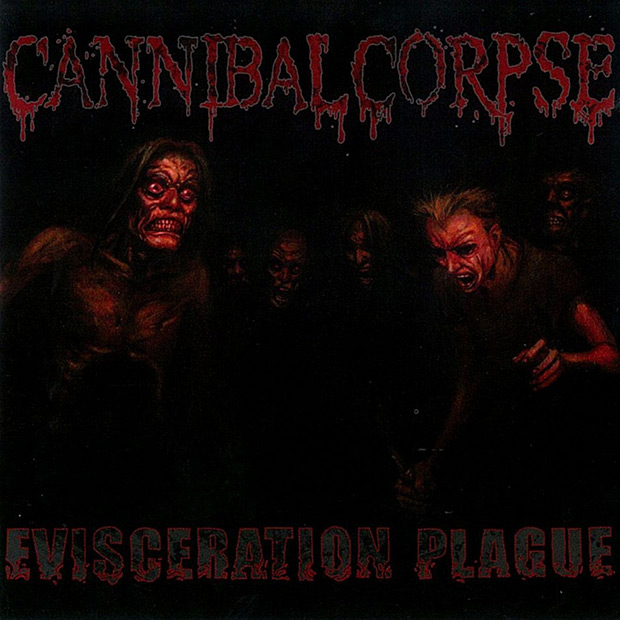 After more than twenty years in the music business the Godfathers of Death Metal and the masters of horror and all things macabre are back and stronger than ever. With the upcoming release of their latest studio record Evisceration Plague, due in stores February 3rd, Cannibal Corpse once again reiterate why they have had so much staying power and so much influence on the Death Metal scene.

Known for their horror and violence-inspired, nightmare-inducing song titles; Evisceration Plague is no exception. With song titles such as “Beheading And Burning,” “Shatter Their Bones,” “Carrion Sculpted Entity” and “Skewered From Ear To Ear” this disc is definitely not for the faint of heart.

Musically however, this disc is pure death metal bliss. Evisceration Plague is A beefy, detailed thundering display of fury in which the band still brings the brutal heaviness they are known for, while also incorporating a fair amount of melodic overtones to each song making them more dynamic. While the band keeps their signature sound, they really kick it up a notch by adding grooves to the songs that are almost infectious.

I am hard pressed to find a song on here that I do not like but I am particularly fond of “Skewered from Ear To,” “Cauldron Of Hate” and the title song “Evisceration Plague.” All three of these songs combine unbelievable heaviness with a good groove.

Lastly, the production here is sparkling. On many death metal records the final mix ends up being muddy and crowded, and instruments seem to get lost amongst the rest. Not so on Evisceration Plague; no matter how complicated, no matter intense everything clear and crisp sounding.

Evisceration Plague proves just how significant and relevant the music of Cannibal Corpse still is. I feel it is a worthy addition to any collection, or a starting point for anyone that wants to learn about this genre-defining band.  [ END ]