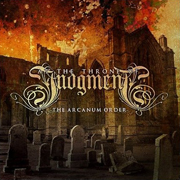 At The Throne Of Judgment

In its lifespan, Death Metal has seen thew rise of some amazing bands. First off, Cannibal Corpse, then Carcass, then Kataklysm, then The Black Dahlia Murder, and now, At The Throne Of Judgment has risen to the occasion.

To start off, I would like to say one thing. Imagine The Black Dahlia Murder, but more brutal, heavier, and louder; that would be the sound of At The Throne Of Judgment. With tracks such as “Delphic Star” and “Martyrdom; Ruin of Gaia”, you can’t go wrong. The aggression is palpable, feeding into every pore of the listener. Eric’s vocals alone are enough to shudder the mind of Death himself, considering his vocals range from higher screams, right down to low, demonic growls only emitted by those most unholy.

The aforementioned track, “Delphic Star” is my personal favourite on the album. The entire track has an ultimate groove about it. While it is incredibly heavy, it is also one of the most soothing tracks in my mind. This is largely due to the vast amount of Greek Mythology that is splashed across the lyrics. And what song is complete without a breakdown!? (Sorry… I couldn’t resist)

As for the genre itself, I am damn proud to have had these guys carve a new face into metal, unfortunately for us all, the band has broken up. This is a damn shame, and we will not let these guys be forgotten. To ATTOJ!  [ END ]