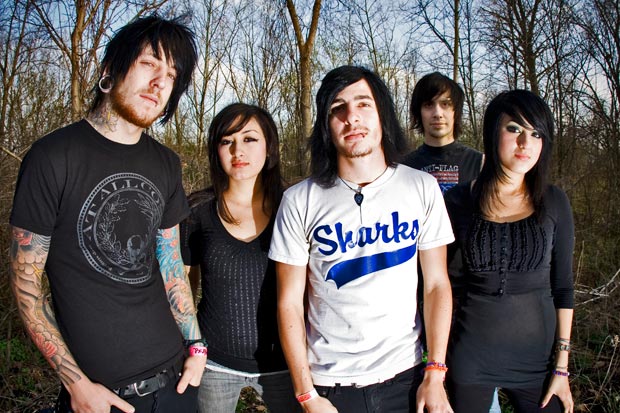 They have performed with heavy hitters such as Kittie, Walls of Jericho, Papa Roach, (hed) pe and Walls of Jericho, as well as on the infamous Warped Tour in 2006. Their first full length album, Reach was released in February 2008, and the two women in the band, sisters Alexia and Anissa Rodriguez, were profiled in the Nov. 2008 issue of Revolver magazine for the “Hottest Chicks in Metal” feature. And they are still young! With so much success coming at them so quickly and a determination unmatched by many veteran bands, Phoenix based Eyes Set to Kill is definitely a band to keep an eye on. I recently had the opportunity to speak to Alexia Rodriguez, the vocalist, guitarist and piano player as well as Brandon Anderson, the keyboardist and screamer, about life on the road, achieving success at such a young age, and what the future holds for the band.

I heard there was an interesting story about Alexia and Anissa leaving home at an early age to pursue music. What is the story?
Alexia: I started playing guitar at the end of middle school and Anissa was really into the fact that I was starting to pursue my dream with music cuz we were both really into music when we were younger, I mean, we’re still young now, but we both really liked music and I never planned to go far into it but now that I’ve gotten into it I can’t picture myself doing anything else. So then she started playing in high school because she said that I inspired her and she really wanted to do the same thing as the bands she listened to, you know? We just kept doing that, we tried to find a bunch of members. We didn’t want to start a chick band, we just wanted it to be co-ed I guess because we didn’t want to fall under the cliché or stereotype. So we went through a lot of members, we tried to find a bunch of guys and then we finally got who we have today and it’s all perfect.

Well that’s good! So did you have auditions, or did you hand out flyers and stuff?
Alexia: We did some flyers at Guitar Center and things like that, and there’s this thing in Arizona called azpunk.net where people would post bulletins on just like, selling instruments or looking for members, and we didn’t have any luck with that so we first got our new members through relationships with our friends and then over time we made friends with other bands. We met Brandon through another band that we were friends with and when he quit his band he joined our band. I don’t know, everything just kind of fell into place, it’s strange but it’s all good.

Brandon: And Greg and Caleb are both 21.

Ok. Now you talked a little bit about this earlier, but your band receives a lot of attention because it is fronted by a female, you had the spread in Revolver… do you think that the media tends to focus on the fact that you are a female fronted band rather than the music itself sometimes?
Alexia: No, I think that’s what everyone sees at first cuz everyone judges a book by it’s cover, if you know what I mean, like if you see a poster of us, people are probably gonna listen to us or go on MySpace and listen to us just cuz they see there’s girls in it, it’s kind of interesting. Then hopefully after that they realize that we actually have talent. And I think everyone usually gets it, I don’t think there’s anyone that’s like, “oh, they’re big because they have chicks in their band.”

It seems like over the last few years there has been more girls getting involved in music.
Alexia: Ya, I would like to see more girls in genres that most girls don’t tend to be in. There’s a lot of more, female fronted bands that are poppy or country. I just think there should be more girls in other genres because girls can do whatever they want. There shouldn’t be a kind of band that only guys can be in or a kind of band that only girls can be in.

True. So how did you guys name your band?
Alexia: I wrote a poem when I was in high school when I was like, 16. The poem was basically about a criminal whose eyes were set to kill. It was basically about how determined he was to reach his goal. I thought ‘eyes set to kill’ sounded cool and there was meaning behind it. It means to be really determined and strive for what you believe in. Weird to explain. I always feel weird explaining that question cuz I never explain it too well.

Well, it’s definitely original. You definitely remember it for sure.
Alexia: Thank you.

So you achieved a lot of your success online, through MySpace and stuff, I read somewhere that you booked an entire year of shows just by MySpace, what have been the pros and cons to doing stuff online?
Brandon: Well, probably the best thing about it is it’s easy promotion, you have basically an infinite audience you can reach out to anyone to promote your band. But the hard part of music being so big online is that nowadays there’s so much competition that it’s rough. It’s a double-edged sword, it’s cool, because anyone can get anywhere, anyone can reach anyone online but the bad part about that is there’s so much competition that it makes it so much harder to make a name for yourself really.

Alexia: I think musically, I’d say like, for me, I grew up listening to a lot of Thrice and that’s all the stuff I would listen to when I first started playing electric guitar. I agree completely with the Blink 182 thing though, because they’re like one of the bands that got me into just playing rock. Before I was into Michelle Branch and all this girlie stuff, so they introduced me into a rockier part of being in a band and their energy on stage and in their songs is crazy. I just hope we can make someone feel…

Brandon: We try to interact a lot with fans. We’re pretty normal, we don’t do anything like, too crazy. We have a lot of fun and try to keep people involved, but it is kind of different because a lot of bands are all guys and they just have dudes like throwing their guitars millions of feet in the air and banging their heads. That looks kind of weird if you have two pretty girls doing that.

Alexia: We still try to rock out but we don’t want to look too ridiculous or hurt ourselves but I think it’s just different too see a bassist and a guitarist and they’re girls rocking out. It’s pretty fun. I think it’s especially entertaining for the girls that come see us because there’s actually a lot of girls who go to shows who want to be in Anissa and I’s position. It’s entertaining for them because they probably imagine themselves up there and have more fun seeing people like themselves on-stage.

So how has it been to achieve success at such a young age? Was that a hard transition?
Alexia: No not at all.

Brandon: It’s been like, super gradual, we’ve been working hard touring that kind of thing for two years and it’s not like overnight, we were able to tour the country and actually bring kids to shows and have fun and stuff, but ya, it’s awesome, it’s pretty surreal. Three, four years ago I never would have thought, “ya, I bet I could do that.” It was just more like a dream for me and it just kind of happened, we worked on it hard enough and long enough.

Sounds like fun, I am in a little cubicle in Pocatello, Idaho! I can only imagine! [laughs]
Alexia: It’s kind of the same though because we’re stuck in a van. You’re at home though. We kind of have our own beds or bunks but it’s just like the seats, so it’s like our own little rooms in the van. When someone, say like, my bed is like the middle seat, and our merch girl, if she’s ever sitting in like my bed I always think of that as my room so I’ll always be like, “wait, why are you sitting here?” Then I realize how dumb that is because I’m actually getting mad about somebody sitting in a seat that doesn’t have my name on it or anything. You get so used to living in here that it’s seriously like our house.

It’s not as glamorous as people think, huh?
Alexia: Ya, it’s really fun though.

Brandon: Ya, I haven’t showered in a week. That’s kind of getting to me. [laughs]

Where do you get the inspiration for your song lyrics?
Brandon: Some songs, she’ll (Alexia) write like 90 percent of it or so, but as far as me, I just try and write about real life experiences that we both can relate to. Sometimes, a lot of times actually, the song isn’t necessarily about my personal life, I just try and make it like a little more relatable because in all honestly my life isn’t the most exciting, emotional, ya know what I mean? If you were to write an album on my life it probably wouldn’t be too exciting. You kind of have to use your imagination and get creative with it. I guess we try and write music that hopefully people can relate to, that can brighten up their mood and whatever issues they’re going through, hopefully they can listen to a song on the album and feel better about it, ya know, we try and do things like that.

Alexia: And I’m opposite of Brandon, so I’m dramatic, so everything is emotional to me. I look at writing and composing as therapy almost, so if I am having a problem I write right away instead of talking to people. It’s kind of like anti-social but it’s more creative for me. And usually the stuff I go through that are dramatic or emotional, like divorce or something or breaking up with someone, anyone can relate to so I think it’s really perfect to write about that stuff because people can understand or translate or interpret whatever from the song. But on the new album we’re writing more… to…

Brandon: What’s it called when you’re writing about, not like, yourself? [Brandon to Alexia} You mean, autobiographical? Is that what you’re talking about?

Brandon: We’re doing that a lot on this new album, it’s just kind of like writing experiences through other people’s eyes even if it is directly about something we are going through. It’s cool to write sometimes through the eyes of someone else.

Alexia: We take other people’s experiences and put ourselves in their shoes to write about it.

Brandon: It’s really cool having Alexia doing singing and me doing screaming and the whole female/male dynamic because she can sing about one perspective on the issue and I can do the opposite. So it’s almost like writing a story with two sides.

So you guys are working on your second album?
Brandon: Ya, this is our second full-length album.

When is that gonna be out?
Brandon: We’re gonna be writing it in December/January and recording it in February so it will be out probably next summer but…

Brandon: Ya, we can’t promise but we’re definitely trying…

Alexia: That is our plan. Definitely next year though.  [ END ]