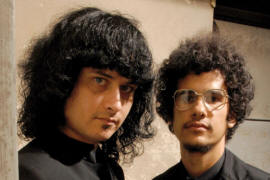 I was late. Any semi-serious journalist knows you should NEVER be late. A time miscalculation coupled with a twenty-minute goose chase at the venue did not sit well with The Mars Volta’s tour manager. Extremely disgruntled, he told me I would not be interviewing Omar Rodriguez-Lopez, lead guitarist, composer, and probably one of the most brilliant men in music. Swallowing my chagrin, I decided to find the Universal Music label rep (my main contact that I should have found first). Instead, I found Omar. I pled my case and expressed my frustration with jumping through the tour staff’s hoops. Reluctantly, he acquiesced and led me to the backstage bathroom. (No, he didn’t want me to hold it for him.)

I was grateful for his benevolence, and made it quick. Though the interview lasted less than ten minutes, I learned a lot about Omar. I wasn’t dazzled after I had left—I still felt like a supreme asshole for being late and inconveniencing Omar—but listening to the tape, I can’t help but feel extremely satisfied with our conversation. Here’s what was said in the little lavatory:

So what would you do once that happens?
Omar: Well I’d still record music. I’d probably still record as much music and play music with people, I just…there wouldn’t be an emphasis on playing it live, on releasing records. It would just go back to the way it was before, you know, we became know as “musicians,” or what not. It would be just how it was in the beginning. It would be a return to practicalities.

I know you work ahead so much, do you ever figure you would just drop new material on whim, sort of like what Trent Reznor did a few weeks ago?
Omar: What do you mean? I don’t know what he did.

He released an album, Ghosts I-IV—and that was a digital release, but it was also a retail release—and then, I think it was roughly [two] months since that was released, he released a totally new record online for free, just because he didn’t want to wait another year to put out another record.
Omar: Oh yeah, that’s cool. That’s definitely cool.

Do you feel like that’s something you might do?
Omar: I mean, yeah. I mean it’s something that I do now on my own. And once we get let out of this contract with Universal, sure. It’s just when you play ball with major labels they always have schedules and politics on when you can release a record or not—but definitely.

Cool. A friend told me you guys were booed off stage once in Montreal I think—it was a few years ago. How does that make you feel when something like that happens?
Omar: I don’t remember—oh it must have been when we were opening for System Of A Down.

Yeah, I think that’s what it was.
Omar: I don’t know. It really doesn’t…it just makes you play in a different way, and, um, it’s something that we’ve been used to from the beginning when we weren’t liked—you know, when we weren’t even known and we were playing places and people didn’t like us. But, playing for people can sometimes be warfare, and that’s a good thing that happened. It’s just as good to play for people who don’t like you as it is to play for people who love everything that you do, and I’ve never had the feeling that I’ve been booed off stage because no matter what people have thought or thrown at us or said we’ve always played our entire set, and were proud of what we did. So, it’s more of, you know, doing something [that] inspires people. And that show I honestly can’t even remember being—I can remember way worse times opening for Rage Against The Machine when we were in At The Drive-In. People, nonstop, just throwing things at us while we were playing—the whole set just throwing stuff at us and calling us faggots. So somebody booing at us, I mean, we can’t even hear those people over our music. Our music is loud, and we’re a loud band. That’s probably why we didn’t even know we were being booed. But, to answer the question, usually it’s nice.

Fair enough. Speaking of love with women, I’m curious—like, I’m not trying to get the dirt or anything, but—do you have time for that in your life?
Omar: Um, not usually. Sometimes, but not usually.

How does that make you feel?
Omar: No which way. I mean I’ve had romance in my life, if that’s what you mean, and romance comes and goes, and it begins and it ends just like everything else. But, I’m a bit of a romantic, so I don’t…I’m not stressing over it. Because relationships end and because I work so much, it doesn’t mean that I’ve given up on the idea that some day, somebody will come along who completely appreciates and understands how important what I do is to me, but maybe somebody will come along, I’ll mellow out, and I’ll be able to find a balance between the two. You know we know that everything changes, so, you know that no matter what’s happened in the past and what losses I’ve suffered in the past—and though I might suffer more losses in the future—it’s not a negative thing. I have to think only about the present.

Cool. You said in an interview with MTV Italy, “When will we see a woman or a black person running for president?” and now that seems to be the case, but do you think that’s going to be a significant change?
Omar: Not at all. And what I think I said was, “When will we see a black president or a woman president?” And as we see, we all know neither of those people are gonna win. And even then it was just to make a point because I think even if, whoever those people are—[Obama], or Clinton, whatever those people are—I think even if either of them got elected it doesn’t really matter. I mean I think it’s nice. I think it would matter in terms of giving people a—what do you call it…not moral boost…I forget what the word is, an English word…morale!—it would give people morale, or something like this, to think that things are changing. But things in [the US] will never change, until there’s a movement that makes it change. In other words, until there’s some sort of revolution, which means violence and upheaval—things that I’m not too interested in, but that it’s the…historically it’s been the only way that old systems have been changed. And [the US] has been set up in a way…it’s run by old money, which means it’s run by white money and male money. And that doesn’t have any space in the equation, really, for [Hispanics], or for women, or for African-Americans, or for Hindus, or for anyone else who doesn’t come from a long line, a long lineage of slave ownership, and bloodshed, and lies, and secrecy, and dominance, and…so, that’s always gonna be there—and all the Bilderberg Groups, and all the pharmaceutical companies, and all the people who are really making the decisions in [the US]—those power structures aren’t going to change. Those are handed down generation through generation, and the only way that will ever change would be through—you know, in the same way that the country was founded—by people being really fed up finally and saying this doesn’t work for us anymore, and I would rather lose everything that I have, including my life, than to live like this for one more day. So, I don’t think that’s going to happen any time soon because the system’s also been set up in a very ingenious way where people are pacified and—myself included—are given their commodities and people are sort of on an isolationist trip where it’s like, as long as I can do my thing, and as long as I have the food that I like, and I have the toys that I like, and I have my favourite TV show and my favourite movie, then I’m fine and we don’t need that much change.

Man, I totally agree. I listened to a radio clip on a radio talk show. This woman phoned in because she was offended cause some comedian made a religious joke, and she said, verbatim, “You don’t talk about religion or politics.” And to me that just seemed like she was being willfully ignorant—and I mean, what a great job the powers that be are doing if they can convince people to be willfully ignorant of certain things that they want them to be ignorant about, like religion and politics.
Omar: Right, right, right.

It’s very depressing. But in terms of change, Cedric suggested in the same interview with MTV Italy that societal change will only come from “infecting the youth.” That’s sort of a paraphrase, but by infecting the youth with, I guess, counterculture ideals, would that actually do anything? Would violence still be needed?
Omar: Well the youth is where it’s at, you know? People who are gonna really…the people historically who have led revolutions or have led big changes with people were coming from a very fresh perspective, and who felt like they had nothing to lose, who felt like they had all the energy in the world. As you get older, you get weaker and you get slower—generally speaking—and your ideas soften. But when you’re young, you have that fire inside, and you have that feeling that we all have when we’re younger of being invincible. I think the point he was trying to make was that change usually comes from our youth, from the people who are going to lead tomorrow, and people who like fresh ideas—because the old people, they want to keep things the same way. They want to keep ‘the America that I know and love. This is my America. Blah, blah, blah, blah, blah.’ They really like the structure and they like the life that they’ve led, and they like the changes that they’ve made, and they want everything to sort of fall into that category. And affecting younger people…it doesn’t have to be counterculture, it just means knowledge. It just means giving people access to real information instead of the information we have now. You know now—well the way it’s been historically—we go to schools and they teach us about Thanksgiving, and about how the Pilgrims and the Indians shared this banquet, blah blah blah. We need schools to say, ‘We came over here and we murdered a hundred million Native Americans, took their land, made them alcoholics, gave them sickness, raped their women, butchered their children.’ You know, this is the kind of thing that youth needs to be infected with—from a very young age, understanding what’s wrong with the way things have been set up; from a very young age understanding that our forefathers, one day—our, yours, whoever’s forefathers, one day—wrote the Declaration of Independence, and that “all men are created equal,” and then they would say, “Now go bring me a sandwich, nigger.” You know, those kind of things, the things they don’t teach you in school, and I think that that’s the main point. You know again, when you’re young, when you’re a youth you have that fire and you have that passion that slowly…I think it doesn’t fade out, but it changes as you get older, and your life starts to develop.  [ END ]