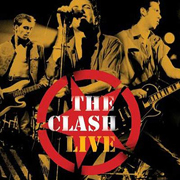 The Clash is one of those bands whose historical significance and popularity I never understood. So they rode the first wave of UK punk; they weren’t alone. They were punk-rockers, yet they weren’t assholes; okay, that warrants some credit. They insisted on keeping record and ticket prices to make them fan-affordable; kay, getting cooler. They were unabashedly political and laced tunes with left-wing lines; pretty admirable—though The Clash certainly was not the first band to write politically motivated songs. There was another British band (and several others) before them who stirred the polis. You may have heard of them. They were called The Beatles. Given The Clash’s political precursors, why make a big stink about Joe Strummer’s soapbox sermons? They weren’t necessarily anything new, and they certainly weren’t articulate.

Apparently Epic (read: Sony-BMG) decided that The Clash’s mubled musings should be relived, so they compiled an array of mostly live performances, a few music vids, and a couple embarrassing television interviews (and I mean embarrassing for journalists. That shit is BAD. Where’s Strombo when you need him?), and called it The Clash Live: Revolution Rock.

The meat and potatoes is The Clash’s live performances, of course. After seeing some of the early recordings—which boasted not only terrible sound quality, but terrible videography as well—the excitement surrounding the band during the late-70s was palpable. I understood why The Clash generated so much buzz at the time: their live performances were animated and zealous. Joe Strummer often, if not always, looked like a chained rabid dog. Though, the excitement waned as the compilation progressed, and the material soon became repetitive and/or unstimulating.

People who were alive during the height of The Clash’s popularity will reminisce watching the concert excerpts, but ultimately the live recordings show how great The Clash wasn’t. Charismatic they are, noteworthy songwriters they are not. The band is relatively coordinated live, but one could hardly say they’re technically sound. After seeing Strummer sing live, I think I know where the inspiration for Timmy and the Lords of the Underworld came from. I don’t like making jokes about the mentally handicapped, but based on Strummer’s on-stage behaviour it is really surprising how many people respected him.

The Clash Live: Revolution Rock is a cash cow, and a rather insulting one at that. The editing is jarring, and at times borders on disjunctive. The extras are dismal, and there is no commentary from band members, or even producers. Sony-BMG is banking on the nostalgia factor—which is the only thing you will get from this disc—to make them a quick buck. Apparently, irony is profitable.  [ END ]