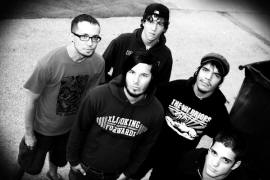 Interview with Take It Back! vocalist Zack McKim

Defined in their bio as a brand of high-energy post-hardcore, Christian Rockers Take It Back are preparing to take their music and their message to the masses. Having recently signed to Facedown Records the band is hard at work on their debut record which is due out sometime this summer. They are also scheduled to play the Facedown Fest this spring with other artists such as Inked in Blood and Impending Doom. Recently, vocalist Zack McKim took time out from recording to answer a few questions for PureGrainAudio.

Your record label Facedown Records has said that, “…it is rare to find a band that can successfully balance the immense responsibility of a self-imposed ‘Grand Design’ with the endless pursuit of entertainment.” How do you feel about this statement?
Zack: Our band as a whole knows that we are nothing without Jesus Christ and that without His endless grace and mercy we could never be free to do what we do. We want our music and lyrics to reflect in some way, shape or form the Glory of God. We write what we feel, if people are entertained by what we do then that’s awesome, if not then that’s okay too.

The name of the band Take it Back!, is interesting to say the least and it sounds as if there is a story behind it. Where did this name come from?
Zack: There’s really not much of a story at all… One day our guitarist, Daniel and our old drummer, Clint were sitting trying to think of names for the band and they came up with “Take It Back.” We added the exclamation point later but it just kind of stuck… and it’s a Seventh Star song… legit.

You guys are putting a different spin on the whole Metal scene, a genre often known for dark and often demonic themes, you are adding spiritual even religious themes. Do you think this will sit well with fans of the genre? Has there been any backlash from the Metal community? What about backlash from the religious community?
Zack: There has been some opposition from some of the bands and people we’ve played with or for, we’ve gotten some pretty hateful messages about how un-punk rock it is to be a Christian and crap like that, but it comes with the territory. We just try not to judge and pray for grace and wisdom in those situations, God is faithful. As far as the Christian community goes, they’ve been very supportive of our ministry oddly enough. We’ve had the occasional holy roller that will tell us we’re being used by the devil or something like that, but most Christians seem to get it even if they don’t like the music.

What is it that gives you inspiration when writing lyrics and is there going to be a theme behind the writing of your debut record?
Zack: Most of my inspiration comes from a hope that God is going to do something huge with our generation. I’ve been through some crappy things and done some stupid stuff and I see some of these kids doing the same stuff and I know that the only thing that will fill the voids in their lives is the love of Jesus Christ. When we write a song we try to tell a story, we try to bring in an imagery of coming from darkness back into the light. If our record has one central theme I want it to center around the grace of God.

Many of your songs are so hard and intense that I’m sure they translate well into a live environment taking on a whole new life in front of an audience. How does it make you feel when the emotion or power which you envisioned when recording a song comes to life when playing in front of a crowd?
Zack: Most of the time it’s awesome to see your vision become a reality… kids singing along to your songs, dancing super hard, piling up trying to get to the mic. But sometimes it’s scary… I’ve left the stage with dislocated ribs, those are the fun shows. Our home venue in Fayetteville is called The Music Hall, it’s always sweet when we play there… kids hanging from the ceiling fans and head walking, it’s not unusual to have 30 or 40 kids on the stage by the end of the set. I normally wake up the next day with all kinds of aches and pains. I love it.

What are some of the artists or bands which have greatly influenced you guys and your music?
Zack: Dude, there are way too many… Comeback Kid (pre-Broadcasting), NIV, Bane, Dead Hearts, Dogwood, this list could go on and on.

Do you find it difficult being away from family and friends for such an extensive period of time? How do you cope with the separation?
Zack: We all either live with our families or really close to them so when we’re at home we see them a lot, but if we stay very long we’re usually ready to leave again.

Do you have any special rules or rituals that you follow while you’re out on the road?
Zack: We just try to keep it clean… you know… no drinking, smoking, pre-marital sex. Oh, and Andy’s not allowed to drive the van… ever.

When you are out on the road anything can happen and often does. Can you think of any disastrous events that happened while out on tour? How did you solve the problem?
Zack: One time we were playing a festival in Joplin, MO and we had a wreck. We were on our way to the show and we hit another car. We didn’t know how we were going to get to the show or much less, how we were going to get back home. Luckily, none of our equipment was damaged and some of our good friends in Sounding The Silence were playing that day, so they came and picked us up and loaded all our gear in their trailer and took us to the show… we had a sick show and met a lot of sweet people. The show must go on.

What is next for Take it Back!?
Zack: Well, we’re going to put out our first record hopefully in the summer sometime, tour a lot and we’re talking about starting a church in our hometown. We should have a busy year.  [ END ]