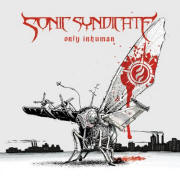 Sonic Syndicate is a Death Metal band that hails from Sweden. This says a lot about the band already. They are obviously good if there music has made it all the way from Sweden to Canada. The band members include: Roland Johansson (vocals), Richard Sjunnesson (vocals), Roger Sjunnesson (guitar), Robin Sjunnesson (guitar), Karim Axelsson (bass), and finally John Benglsson (drums). Personally I think that this band has one to many members, but with the sound they have I guess it is just perfect.

The first track on Sonic Syndicate’s CD Only Inhuman is “Aftermath.” I love the intro to this song. I love to see a female bass player who can bring good name to females all across the globe. The bass riff in the intro is a beautiful lick that sounds amazing. This entire song reminds me much of Atreyu. The vocal styles of both singers are very similar to that of Atreyu. Also the instrumental sounds like something that Atreyu would play.

The fifth track on the album is entitled “Enclave.” It shows the softer side of death metal. The soft vocal’s accompanied with the slow guitar. I personally think that this shows how nice of a voice the vocalist truly has. It’s refreshing to see a death metal band that isn’t afraid to play to there strengths, they don’t stick to just one style of music.

The last track on the CD is “Flashback.” The Vocals are much harsher in this song then most of the others. Once again this song reminds me of Atreyu. I know that this is the band’s own music. I just can’t help but feel like I’m listening to a different band when I’m listening to them though. No disrespect meant towards Sonic Syndicate whatsoever. I love there sound, I just would like to hear something new, something that doesn’t sound like a cover band.

Overall, this album was somewhat of a disappointment to me. I feel that the band has the talent to be so much more then they are. They just don’t show much of it on this particular album. I wish the best of luck to the boys and girls of Sonic Syndicate, hopefully your next album can be a little different. I give Only Inhuman a 6.7/10.  [ END ]