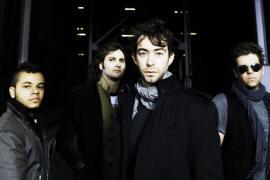 Ism. Seems like we hear that suffix all the time in this day and age, but not only is it a cornerstone of English grammar, it’s also a really cool rock band. Ism hails from New York City and over the last five years, has progressively built up a very strong and loyal following of fans. The band has just recently completed work on their brand new studio album Urgency which is due out in August. Urgency will be the follow up to Ism’s very successful debut record Monkey Underneath. With the record now finished, look out for Ism tour dates throughout the summer at the band’s MySpace page. Recently we had the good fortune of speaking with Ism’s frontman and lead singer Andre Mistier about all things Ism. Here’s what he had to say….

Ism has been around now for about five years in total. How did you all meet and how did a band come out of it?
Andre: This project initially started with me. Gerard the guitarist came in a year later, Leigh the bassist came in another year later, and our drummer Greg has only been with us for a few months. You know, we’ve tried a number of different methods for finding people to work with, but in the end the only people who have ever worked out were friends or recommendations from friends.

Ism seems like quite an appropriate band name for this day and age since we seem to live in a world of ever growing “isms.” How did you come up with this name? Is my speculation at all correct?
Andre: Well, I certainly agree that Ism is an appropriate and timely name – I’m glad you like it! Actually, we didn’t come up with it – a number of years back, before our first album Monkey Underneath, we were looking for a name, couldn’t think of anything, and decided to ask our friends. After a couple of not very good suggestions, one friend called me up and said, “I’ve got it! I know what your name is. So, I wrote it on a rock and placed it on the highest plateau point in Central Park. Go find it.” So, after a little searching, I went up to Summit Point and looked around. On the plateau there were three flat rocks, and the highest of them was being used by a couple for their picnic. I went up to the rock, didn’t say anything to the couple, and reached down to grab a small rock that had the word, “ism” written on it in lower-case letters. I immediately knew that it was the right name, broke up laughing, and walked down the hill. In hindsight, I probably really scared the two picnic-ers.

Let’s talk a bit about your brand new studio record Urgency which is due out in August. How has the album been coming along and are you pleased with the process so far?
Andre: Man, I am so pleased. The happiest I have ever been with music we’ve made. We got to record in a great studio with producer Joe Blaney, got to record both onto tape and onto computer, and got access to both incredible vintage gear and the best that software has to offer. And as part of our whole goal has always been to speak in the modern world, we have always been interested in mixing both the organic (like vocals, guitars, and pianos) and the inorganic (like bleeps and electronic noises). I feel like we really got to explore the full spectrum of this on Urgency. And tying it all together, Mark Needham just did a fantastic job with the mixes, really elevating the whole project.

Urgency is of course the follow up to your successful debut release Monkey Underneath in 2006. What would you say is different about them? What new surprises or changes might we expect from the new record?
Andre: First of all, I just think the songs are just better this time around. As we’ve gone on and toured and toured, we’ve really honed in on what we’re trying to do and how to say it. Also, on the first album, we recorded the live parts, and then put the electronic stuff down afterwards. This time we flipped that around, and I feel it really gave the live instruments more room to play and be free. Urgency is definitely both more electronic and danceable, and at the same time harder and edgier, than Monkey Underneath.

To produce Urgency, you worked with Joe Blaney, a very successful producer who has worked with legendary acts such as The Clash and Prince. How did you first get in touch with Joe and how did he become apart of this project?
Andre: We got in touch with Joe through Michael Caplan, the legendary a&r guy who has helped oversee this project. We met with a number of different producers, but when we met Joe it just felt right. We were on the same page not only about our songs and where to take them, but about our views on music in general. While we interviewed each producer a number of times, after our first meeting with Joe I knew he was going to produce the record.

How would you personally describe Urgency? Is it just a collection of songs or would you say that there’s a sort of recurring theme or concept behind the songs and the album overall?
Andre: A few years ago, my father passed away. This started a whole journey for me in which I really looked inside and tried to explore what I really did or didn’t care about, and what motivations really mattered to me. After he died I found that all the ways in which my beliefs came from him were just staring at me like in a mirror, and I was able to decide which ones I did and didn’t want to keep. But this made me realize that so much of what I think and feel has come from other people – my mom, my school and teachers, my friends, movies, TV, etc. And whether I really did or didn’t believe any of them, my reasons for believing them were not my own – they were someone else’s. So, I ended up starting over, stripping everything away and discovering what really mattered to me and why, from the ground up. This album is what I have seen about myself and the people around me in the course of this journey. It’s about trying to understand what your real motivations are, and what really matters to you, as opposed to what you’ve been told to believe. It’s kind of my guide to starting over.

Urgency seems like quite a deep record musically and thematically, but what would you say is your favorite track off the album and why?
Andre: Very difficult to answer, very difficult. One of my favorite tracks on the album is “Sacred Cows” the first single off the album. It’s a call out to people to stop wasting time and go find out what they believe. Another is “Urgency” the title track, which is about the idea of, if it was the end of the world, what things that you do would you really still care about. It was also the first song written for the album, and the one that started the whole direction of it, both musically and content-wise. I also love “Postlude” because of its controlled chaos, and “Ash and Rose” because it’s just a beautiful song. I could go on, I really like this album.

What is the writing and recording process like in the band? I know you are the lead singer and songwriter but do the other members have a role in the writing as well?
Andre: I generally bring in the structure, the outline, of the song. I write the lyrics, and most of the basic structure of the songs, bringing something in on guitar, bass, or piano. But it’s the whole band together that fills the song in, giving it the texture and sound that, mixed with the content, really defines what Ism is all about.

Since the formation of the band, big success came relatively quickly for Ism, especially because of the hit single “Breathe” off your debut album. What was it like having this success so early in the band’s existence? Did you find that a lot of old friends suddenly started to want to be your friend again if you know what I mean?
Andre: The biggest change in our lives is that we’ve toured so much that we haven’t had as much time for our friends back home. I know I’ve definitely fallen out of contact with a number of people that I wish I’d stayed in touch with. But at the same time, we’ve gotten to make a number of friends in places that we’ve come back to again and again – in some towns we stay at people’s houses and have barbeques rather than hotels. And yes, there is no way we would have become friends without them finding us through our music, but that doesn’t mean the friendship isn’t real. When you’re on the road, it really does make a difference when you find a friendly face that makes you feel at home. Regardless of the reason for getting together – real, false, because we’re people or successful musicians – the experience that you live in the context you’re in is all that you have.

I couldn’t find a lot of information on this, but what is the band’s touring plans like for the summer and the fall? Can we expect to see you guys on the road a lot?
Andre: Yes, we will be touring all over the place. Our big show this summer is playing Riverfest, in Albany, on Saturday, June 14th. After that, probably starting in July, we will be touring most of the country for the next while. The best way to find out will be to check on www.myspace.com/ism

What else can we expect from Ism for the rest of 2008 and in to 2009?
Andre: The album release of Urgency, the first radio single “Sacred Cows,” a video for “Sacred Cows,” and a whole lot of touring. And I want to play a show on the new Virgin Spaceship – still looking for people to underwrite that idea.  [ END ]