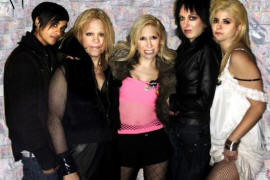 The all girl Canadian punk band Fidget are stirring up quite a scene in the underground punk community. With influences ranging from The Ramones, and Green Day, to L7 and Blondie these girls have put together tracks that are vibrant, fresh and extremely entertaining and enjoyable; especially tracks like “Sociopath” and “Bad Nooz” which immediately remind the listener of the early punk movement. Fidget are planning on touring this summer and if you get a chance to check them out… do it you won’t regret it. Lead singer Nicole LeGault took sometime out of her busy schedule to answer a few questions about Fidget.

What has been the most memorable moment of your career so far?
Nicole: Wow, that’s really tough to narrow down… last week at the rehearsal factory I accidentally stepped in a puddle of puke (I’d like to forget that). Besides that, what comes to mind right now is the Rock Against Depression show last January, it was a lot of fun for a good cause and they really rolled out the red carpet for us.

Every band has its musical influences. What are some of the bands and artists that have greatly influenced your songwriting and performance?
Nicole: We all have a lot of different influences, our lead player likes Green Day and Jimmy Hendrix, our rhythm player likes Hole and Curt Cobain, I like Nomeansno, L7, Ramones and Blondie. I think it all comes out in the mix.

Along those same lines, how do you feel your live shows differ from your CDs?
Nicole: Our live show differs greatly because we embellish the songs and play them in a revised manner. We’re interacting with the crowd and having a good time. Our recordings are very well produced by Mike K of the Playground Studio in LA; our live sound is a lot more guttural and spastic.

Fidget has been nominated for an Ontario Independent Music Award. How does that feel?
Nicole: It feels great, it would feel better if we had won, but it’s true – it is an honor just to be nominated – especially for a song that repeats the word “asshole” so may times in the chorus.

Do you find it difficult being an all woman band in an industry predominantly dominated by men?
Nicole: Yes and no, it really depends upon with whom we are dealing. We enjoy the attention that being a high energy chick-band with chops affords us, although sometimes we do feel we are being discriminated against, albeit usually by some insecure entity that finds us threatening. It’s annoying, but not disrupting.

We have all heard the stories about back stage antics and groupies. Is there any truth to those stories and if so do you have any outrageous stories or tales that you would care to share?
Nicole: Yes, the stories are true, ssshh! Don’t tell anybody! At the wakeboarding festival in Haliburton last summer, our rhythm player Elissa gave one of our fans who accidentally peed her pants her skirt to wear. No one seemed to mind that Elissa played the rest of the night in her bright yellow “Brazil” panties. People were doing back flips off the stage, our ex-bassist cracked her own head with her own bass and went to the hospital and Teresa our lead player saved the day by playing both – man, that chick’s got chops! As for groupies, watch out for that Scotsman with the rubber chicken, he likes to tap dance at our shows in his kilt and top hat.

The public perception of life on the road differs greatly from the reality of it. Can you tell me a little bit about how you travel? (Bus, Van etc…) What accessories do you equip your ride with to make the time go by? What are the living arrangements like while on the road?
Nicole: It’s just like a big slumber party that doesn’t end in the morning! I like to see how many people and how much gear I can fit into my yellow beetle, we like to romp around town exploring, putting up posters, causing distractions – and as for accessories, we bring pillows, you know, for the topless pillow fights.

Do you have any special rules or rituals that you follow while you’re out on the road?
Nicole: No, not really. I know that some singers like to do strange things like eat raw onions or get a good night’s sleep, but I find beer and fatigue work fine for me. Sometimes we all wear fairy wings of different styles and colors, does that count?

The name Fidget sounds as if it has a good story behind it. Care to share it with us?
Nicole: Yes, I was down in California taping a commercial with two of my friends, Danny Casler from National Product and Mike K from the Playground Studio and they both kept fidgeting! Danny would bounce up and down, at one point he was scratching his armpit and Mike kept playing with his heel up on his lap. We were laughing so hard that Danny turned pink and we had to stop taping and wait for him to turn white again. I spontaneously yelled out “Fidget!” and then thought, “hey, that’s a good name for a band.

What is next for Fidget?
Nicole: We just put three new tracks up on our MySpace, we’re looking forward to seeing how the fans respond – we’ve been playing them live for a couple of months and they’ve been going over great! We need more radio airplay, because that is still a very big influence in the industry, and we would like to make a video. We’re looking forward to booking an exciting tour for the summer. Whatever the weather brings, we’ll be writing more music and rocking out to it!  [ END ]