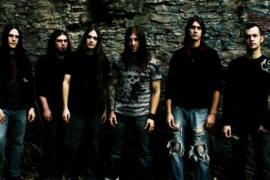 Having just released their newest CD, Metal Blade Recording artists Epicurean are preparing to take their hard hitting brand of metal to the masses. A Consequence of Design is the first in a series of releases the band has planned centered on a theme they describe as “Predetermined Destiny”. Vocalist John Laramy took some time out of preparing for their tour to answer a few questions about A Consequence of Design and the story behind it.

The name of the band Epicurean is interesting to say the least and sounds as if there is a story behind it. Where did the name come from and what is the story?
John: The name really just came about because the meaning and what it stood for was something that the band was really into. It’s a whole philosophy that seemed really cool to us at the time!

Give us some insight into the record A Consequence of Design and the meaning behind its title?
John: Well, the title ties into the concept of the record and the story that will continue throughout the next few records. Basically the title refers to a “Pre-determined destiny” of sorts, which is a pretty strong theme throughout the story.

The band keeps things interesting thematically. Can you talk about some of the subjects you tackle on A Consequence of Design?
John: It all ties into a story, which takes forever to describe in detail… but the basics of it are this: Our story is dealing with the idea of death and what happens to someone when they die. Our main character Gabriel, is just a ghost in the beginning of the album, but he’s not aware of it yet…. So he’s kind of wandering through a bit of a mental fog for the first half of this chapter, and throughout he has strange dreams that seem to foreshadow his future. He doesn’t realize he’s a ghost until he finds his fiancée sitting at his grave. The Narrator is a character that speaks to Gabriel, but doesn’t appear until “Anathema: The Gatekeeper” and he tells Gabriel that he needs to find his way out of the universe of the dead, and travel to this other universe where a conflict is taking place. He tells Gabriel that he has to find Anathema (Who guards the gates that divide the two worlds) and she can let him through. So the second have is Gabriel searching for Anathema, who he finds in the next chapter. So there you go! …And the story continues! Ha-ha.

You worked with Don Debiase, a very well known well respected producer in the Death Metal Scene. How did you get in touch with him and what was it like working with him?
John: He actually found us! We were still an unsigned band and we played a festival in Indianapolis, and he said he checked us out because of our gear… ha-ha. So yeah, he passed us on to our manager and it pretty much just went from there.

All of that passion that you play with must be tough on you physically. How do you prepare for the physical demands of a tour? Especially when you tour incessantly as you guys do?
John: We try really hard to keep up on working out when we’re on the road and eat as well as we can. But really, no matter what you do to prepare, you’re pretty much going to get sick and worn out, ha-ha. It’s basically inevitable.

What is the hardest part about being in a touring metal band and what is the biggest obstacle your band faces?
John: Just trying to get by day-to-day is really the hardest part. We tour so much that none of us even have time to hold down any type of job, and as a new band we really don’t make any money…. So it gets pretty tough when you’re 2000 miles from home and you have to go steal food because you just can’t afford it. Other than that, the touring part of things is really fun 90% of the time… and being in a Metal Band kind of gives you a free pass to be a crazy dirt bag, ha-ha.

Can you offer any advice to any of the younger readers who may be reading this out there and are trying to etch out a career in the music business?
John: I guess just to be really aware of what you’re getting yourself into. It gets harder everyday to make it as a band, and it’s never going to get any easier. You have to be really self aware, and be prepared for the sacrifices you will have to make. Other than that, just make sure that you’re having fun doing it, because if you aren’t, it’s really not worth it.

When you are out on the road anything can happen and often does. Can you think of any disastrous events that happened while out on tour? How did you solve the problem?
John: Worst one we ever had was our old bus (Shitty black short-bus with like 240,000 miles on it) blew up in the middle of winter in Ohio. Ha-ha, so we were stranded on the side of the road in -10 degree wind chill walking down the freeway to call a tow. Luckily a friend in Chicago took a van from another band in town, drove down to get us and we just finished the rest of the tour in some other bands van! Ha-ha. That was a pretty intense disaster I guess….

What is next for Epicurean?
John: We’ve been talking with a few different booking agents about putting some things together. We’re really hoping to get out to Europe by the end of the year as well. Besides that, we’re always working on some new music, so at some point we’re going to take some time off to work on new material, and then just tour as often as we can!

Thanks for taking the time to do this with me!!! Hope everyone gets a chance to check out the record, and hope you enjoy it! Thanks!!!  [ END ]