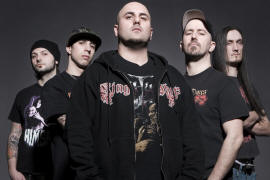 For over a decade now the Swiss band Cataract have been kicking ass and with the release of their newest self-titled CD, they are preparing to continue the worldwide assault. After a line up change that includes a new bass player and a new guitarist, the band has crafted its finest work yet. Brutal and full of aggression Cataract does not disappoint. With the summer festival season in full swing Cataract are preparing to take their show on the road. Don’t miss them! Drummer Ricky Dürst took time out of rehearsal to answer the following questions about the new release.

Now that your self-titled CD Cataract is about to be released, how do you feel about it? Are you pleased with the outcome? What can fans expect when they pick up a copy of it?
Ricky: They can expect our most elaborated work so far, a lot of new flavors in our music but still an album that’s hard hitting, relentless and fast. We’ve gone into new directions with both speed and heaviness, blunt riffing and harmonies. This album very much takes the Cataract sound one step further!

Your new self-titled CD is due in the stores in April. Many of the tracks on the release show a different side of the band by adding more melody and heaviness to the ferocious speed. Do you think this is due in part to your varied influences and or a desire to explore new realms of music?
Ricky: The musical boundaries on our last two albums were quite narrow, and it seemed obsolete to keep going in this frame. We wanted to enlarge our horizon, and since we had a new line up this was the perfect occasion to redefine our sound. We started writing the songs on a completely unrestricted basis, whatever we came up with we worked on and didn’t throw it away because it didn’t sound like a typical cataract riff. Thus, we let the songs grow with their own identities and not into a forced direction. Of course we ended up binning whole songs and a lot of riffs, but like that we were able to add a lot more spice to our music – you will notice that the songs have large variations within and amongst themselves, but because of that the album stays interesting until the last song.

Although Cataract has been around since 1998 you have recently gone through some lineup changes, adding a new guitarist and a new bassist. Your bio states this added fresh blood and creativity to the sound. Are all of the tracks on the newest release the result of this addition or were some of them already underway before the change?
Ricky: One might think that the musical changes have been a result of the new kids on the block, but as stated above, those changes have been on our minds long before. Tom, the new guitarist, has joined us more or less shortly before we started writing the new material and his abilities helped us a lot to evolve our sound. However, most of the songs were composed by Greg, me and Tom arranged, added, and improved them during countless rehearsals. It was a team effort and it was very motivating to see how well it worked. And now that Tom has settled in and Nico on the best way to do so, I’m really keen on what’s gonna happen on the next album.

You guys are a hard working band that plays a ton of shows every year and many festivals such as Hell on Earth, No Mercy and the Czech Brutal Assault Fest. What keeps you going on those lone drawn out tours? Do you find it difficult being away from family and friends for such an extensive period of time? How do you cope with that separation?
Ricky: Number one for still doing it is… we really enjoy it. We love doing this band, we love music and we love to spread the love hahaha! We’re just about to go on a three date weekend in Italy and we’re dead excited about it. As long as we’re enjoying ourselves on these trips, we’ll be doing it. We’d actually like to tour even more but since we’ve all got our regular jobs it’s limited to a few weeks per year…. I guess we’re lucky that all our families know what we’re doing and what it means to us and they are very supportive of it. Some of the girlfriends also tag along to do the merch so it works out – they can check on us and we get the merch sales done haha!

When you are out on the road for a while I am sure you see and experience things you might never have known existed. Are there any stories that stand out in your mind as being exceptionally strange or odd?
Ricky: Oh well, we’ve had some insights into a lot of interesting people. There was this one guy at one of the shows with SFU/Nile with a huge affinity to beatdowns. As soon as he saw someone who apparently was on stage he started babbling to them and somehow managed to piss people off instantly. He got knocked out by our guitarist, by one of the Wykked Wytch guys, I think by one of the Dying Fetus guitarists and finally by the SFU tour manager. Maybe some more. He never stopped. And he always went down after one punch. During an England tour we sneaked into a huge closed down psychiatric ward and made our way into the crematory which also featured a large white marble dissection table that was an exceptional atmosphere.

Many of your songs are hard and intense and I am sure they translate well into a live setting in front of an audience. How does it make you feel when the emotion and in the studio power you envisioned comes to life in front of an audience?
Ricky: Very, very satisfied. That’s what it’s all about! We express ourselves through the music, what we play is what we feel and if we get such a response from the audience it just makes it all worth it. It doesn’t matter where it happens, small or big locations, open air or club show; it always leaves a great memory.

What is next for Cataract?
Ricky: Right now it’s a shit-load of shows to promote our new album, touring in fall and hopefully some more by the beginning of next year!  [ END ]