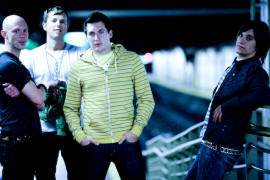 Deep from the heart of the south comes the largely named band Another Big Machine. Formed around 2003 by four guys just out of high school in Baton Rouge, Louisiana, Another Big Machine has started to really break through with their catchy combination of hard and pop rock. Even though the group started out as a cover band, they have over time concocted their own style with the result being the band’s debut album which is due out in June. Recently we had the chance to speak to Another Big Machine’s lead singer Justin McCoy and ask him a few questions about the band. Be on the lookout for Another Big Machine in the coming months.

The group has been around for a few years now. How did you all meet one another and how did a rock band come out of it?
Justin: Everyone in ABM has been playing the same music scene for years. Dane and I met in primary school and have been friends for many years so the two of us began our musical careers together. While Dustin was playing in a band of his own around town we all networked through mutual friends and lined up shows together until eventually, as our friendships and music careers developed we all began to jam with one another.

You originate from the small town of Gonzales, Louisiana, located a short distance from Baton Rouge. What was it like growing up and trying to start a rock band in this extremely small town atmosphere? Do you think it was more challenging than it would be growing up in a big city?
Justin: When we first started, we were still in high school. We had a lot of friends and were the only guys trying to do something with our music. It was a tough start, I remember learning cover songs so we could play at the bars in our home town and working our originals into the set as they were written. I took a few months to start building a strong fan base, but the process was tons of fun. I think it’s a bit easier when you’re starting out in a small town because you tend to know a lot more people. Everyone catches on quicker.

When the band was getting started, you played a lot of cover songs rather than your own original material to appeal to the local music population. Why did you feel it necessary to play covers instead of trying out your own music?
Justin: Living in a small town, the local venues wanted covers. They wanted their customers to hear music they were familiar with. We just wanted to play so we put a fifty song set list together and started booking shows. After we built up bit of a reputation, we were invited in to some of the original music venues around our town and the city. It was soon after that when we started playing only the original shows.

Speaking of which, what type of bands and artists did you cover the most?
Justin: We mainly covered the ‘90s, it was what we grew up listening to. We covered bands like Third Eye Blind, Pearl Jam, STP, Counting Crows, Alice in Chains, Silverchair, Bush, Green Day and The Foo Fighters… I could go on and on. We also covered a few ‘80s tunes.

Where you guys are from is right around where Hurricane Katrina wreaked its havoc a few years ago. What was it like living there during this horrible disaster? How, if at all, did it affect the band?
Justin: It was a crazy time. We all started taking our lives and our music more seriously. You never know when you’re going to take your last breath. Katrina inspired us to write and record in New Orleans. It’s a great city.

Your new self-titled debut album is due out in June. How do you personally feel about how the record has turned out?
Justin: I think it turned out great. I believe many people will relate to the songs on this record and learn to love them as I do. I could not be more pleased with the finished product. We spent a lot of time writing and working on this record.

How did the band go about writing and recording for the album? Did you all write together or are the songs more the efforts of one member?
Justin: Many of the ideas were more focused on one member but most of the songs were collectively written. Everybody does their own thing creating their individual part but when it’s time to write the song, we gel and play together. Some of the record was written in our homes, hotels, the studio, from Baton Rouge, to Nashville, to California. We are always writing and coming up with ideas for songs.

We’re actually an online magazine that originates out of Toronto, Ontario, Canada. Have you guys been up to Canada before and/or done any touring in this area?
Justin: Not yet, but hopefully in the near future. I hear Canada is a great place to play good music.

What does Another Big Machine have planned for the rest of 2008? Do you have any specific goals in mind?
Justin: We are gearing up for video shoots, some acoustic shows, touring, writing, meeting new friends and fans while anticipating the release of our record on June 24th. We’re taking it one step at a time and having fun doing so. Thank you.  [ END ]