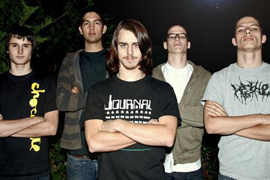 Although they’ve been together for a few years now, the members of Fate are barely of legal drinking age (at least in Canada) and have already garnered a significant following and a recording contract with Metal Blade Records. The group has been steadily developing their sound and musical maturity to the point that they are just set to release their debut album on Metal Blade titled Vultures. The release of the record will coincide with a lot of touring expected throughout the rest of 2008. Recently we caught up with Fate’s lead singer Justin Krahn to ask him a few questions about the band and what they’re all about.

Fate formed in September, 2003 when you guys were still all in middle school. How did you all meet and decide to form this band?
Justin: Well we all pretty much met in school, there really wasn’t much of a choosing process, it was more like this guy played guitar and that guy plays drums. We would basically take what we could get at the time. I think that’s why we’ve had a great number of lineup changes to get to the solid sound we’re at now.

Fate plays a brand of metal that is extremely fast, intense and energetic. Where do you get your inspiration from when writing your music? Who do you consider an influence?
Justin: Each one of us has our own inspirations so it’s really hard to just put down one. And as far as influences we all do our own thing, but personally I’m into a wide range of music, anywhere from Misery Signals to Pantera, from The Black Daliha Murder to Tegan and Sara. Yeah that was pretty gay but I love music, but right now I’m really into The Ocean. And with the things we have encountered it just has a little bit of what every one of us prefers, but it’s only going to get heavier faster and more technical.

Fate’s first big break as a band came when you were asked to play on the Sacramento stop of the Van’s Warped Tour a couple of years ago. Looking back, what do you remember about this gig and how did you feel about your set right after you left the stage?
Justin: All I remember about Warped Tour was that I was only sixteen and Kyle only being fourteen at the time was a real accomplishment in our careers being so young, let alone it was Kyle’s first show ever. And it was a great place to let out our new sound. Personally I thought our set was horrible compared to the other well established bands playing, but other than that it was good for us being so young.

Fate’s brand new and debut album Vultures is set to be released April 29th, 2008 on Metal Blade Records. Now that the record is done, how do you personally feel about how it has turned out?
Justin: As any other band would say about their own albums would be that it could have been better. But considering the fact that a majority of people to hear it in the “buisness” haven’t put it down yet. But yeah other than us listening to it all the time and noticing the smallest flaws we are really happy with it.

What was the writing and recording process like for Vultures? How many songs did you write and where did you record it?
Justin: The writing process was pretty hectic due to us have a last minute member change but when it came down to recording it was very laid back and not what I expected it to be at all. Originally we had written fifteen songs but only ten were meant for the album. We recorded most of the album in Oakland, California at Castle Ultimate Studios, but due to me being ill, I had to finish the rest of my vocals at DST Studios in Sacramento.

I couldn’t find this information but who did you get to produce Vultures? What was it like working with them?
Justin: The CD was produced by Zach O’Herin at Castle Ultimate. He was great to work with; it was like he knew more about our sound than we did (laughs). My favourite part about it was getting phone calls at 11 pm at night and him playing the songs over the phone to get certain parts right.

What do you think is the best track of all on Vultures and why?
Justin: I actually like all the songs on the CD but my favourite track would have to be the title track “Vultures” only because it’s set apart from the whole sound of the CD and I think that really makes it stand out and it’s also unexpected.

On the touring side of things, over the last couple of months you guys played some select dates on the Massacre Monstour with Catalepsy and Blind Witness. How did these shows go? Were you pleased with the crowd response to your music?
Justin: Well I don’t know if you have heard that we were in a pretty bad accident while on the road so unfortunately we had to drop from both of the tours we were on but besides that, the tour was great, all the bands were awesome especially Epicurian and Blind Witness. The shows were great, people responded very well to the new shit and that just gave us that extra little push to get the fuck out there and get shit done.

What’s it like having this much success this early in your lives and musical careers? Did you ever expect things to move this quickly for the band?
Justin: It’s fucking great! For one we are on the best label on the face of the earth not to mention that we have never felt so welcome in our lives and that you get personalized attention from everyone at Metal Blade and we’re not just ‘another band’ on the label and that’s amazing for how big Metal Blade has become, it’s a fucking honour working with them! And for two, being this young gives much more room to grow not only musically but maturely. And we never expected things to come so fast but we were working our asses off to get this far.

Things seem to be really picking up for Fate at the moment. What does the band have planned for the rest of 2008?
Justin: Well after we get things situated from the crash, we’re going to be promoting the fuck out of this new album. Getting on as many tours as possible and just getting our name out there.  [ END ]