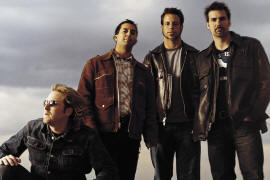 “I feel liberated, admits Ross. I couldn’t have written these songs when I was 24. I thought I could, but I really couldn’t, having not gone through these experiences myself. I feel like I’m just beginning as a songwriter.”

These are the words of Jason Ross of Seven Mary Three. With the release of their sixth studio album Day and Night Driving, the band have solidified their status as true storytellers. While the musical approach is a bit different from previous releases such as the platinum American Standard, the songwriting remains strong. Each track is a story in itself, expertly crafted to draw the listener in. Day and Night Driving is well-produced and very well-written and will be a record that old and new fans alike will not want to miss. Jason Ross took some time out of his busy schedule to answer a few questions for PureGrainAudio.

You took a different approach to the writing of this record by taking over a year to write it with just you and your guitar. How do you think this approach affected the songs themselves?
Jason: The songs weren’t built under a microscope. We had a little more time than usual to experiment in the studio, but for the most part we just laid the basics down and picked the take that had the most energy and vibe, and just built on that when necessary. There are also a lot of songs on this record that are just straight up “takes” with little-to-no overdubbing at all: “Upside Down,” “Things I Stole,” “Dead Days….”

Seven Mary Three was not signed to a label while you were writing the record. Did you find it easier to write what you felt rather than having to write to impress or satisfy a label?
Jason: I didn’t think it was any easier, but certainly the fact that no one was looking over our shoulder in the studio helped. We have never really let anyone in the studio label-wise, ever, and I think that distanced us from some of the help we needed at certain points in our career. I navigate away from the people trying to get me to write “Cumbersome: part two.” It’s like we’ve put so much attention towards really learning our craft since the early releases… convincing an audience we are more than just one song has been a large part of my job description for the last decade.

Give us some insight into the title of your upcoming release Day and Night Driving.
Jason: Our whole lives have been traveling for the greater part of 15 years or so. You can tell where you are by the bumps in the road. Certain landmarks welcome you to places you remember, that are never the same. People are the same everywhere. Everyone is different. Everyone has a story to tell. Boredom is laziness. Everyone is looking for a home. That’s it.

Give us some insight into the CD musically. This release is a bit of a departure from some of your previous releases.
Jason: Growling is a younger man’s game. I am a singer. I tell stories. I just got tired of yelling.

What can fans expect when they pick up a copy of Day and Night Driving?
Jason: If you bury it in your yard it will sprout a tree that grows money. And, it can fix anything… is your lover mad at you? Then play them #7… got an un-even chair? Slip that CD under the short-leg and enjoy some wobble-free repose….

What is it that gave you inspiration when writing the lyrics for this CD?
Jason: Well written songs, books, and films of others. Strangers on the street, or in the diner…. Photographs, lots of old photographs.

Seven Mary Three has once again signed to an independent label after having previously been signed to powerhouse Atlantic Records. How has that affected the band? Do you feel you have had more input into your project from start to finish? Did you feel you were able to express yourselves creatively enough?
Jason: We made this record with our own dough, and thankfully found somebody who liked it enough to help us get it out there. Our very first deal was with an independent as well. We have always had enough creative freedom to hang ourselves with.

You guys have been in the business for a long time now. How do you think the internet and sites like MySpace have impacted the industry and your band? Do you think that downloading of songs helps or hinders the artist?
Jason: I have never been a record business basher. Our band enjoyed the last gasp of the old model, and that was a decade ago. The internet has leveled the playing field to some degree — never before has the independent artist had more control over the way they are marketed or promoted. The industry will still rely on tastemakers though: the blogosphere, editorialism, et al. A large part of enjoying music is about discovery, and there is so much to wade through, we are going to need some trusted help in the future discerning what is worth checking out from what is not.

What is next for Seven Mary Three?
Jason: Survival. Gracefully transitioning into something people can grow old with, and musically depend on.  [ END ]