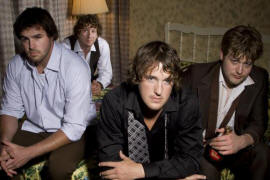 With the Re-release of their album Black Roses on Nashville based Severe Records, Painkiller Hotel are looking to take their music to a greater audience. Pure Rock and Roll with no gimmicks, these guys prove they can rock with the best of them. Catchy melodies with rock sensibilities are what these guys are all about. Painkiller Hotel know how to rock! Guitarist/vocalist Kevin Presbrey spoke with me about the band and their continued success.

What has been the most memorable moment of your career so far?
Kevin: I’d have to say our first trip to South by Southwest in March 07. It was definitely the biggest event we had participated in at that time. The 80 degree weather was pretty nice too!

Every band has its musical influences. What are some of the bands and artists that have greatly influenced your songwriting and performance?
Kevin: The bands that influenced us the most musically are Pearl Jam, Stone Temple Pilots, Radiohead, and Matchbox 20, but lyrically I’d say my greatest influences were Bob Dylan, John Mayer, Jim Croce, James Taylor, and Led Zeppelin.

How does it make you feel when the emotion or power you envisioned while writing a song comes to life in front of an audience?
Kevin: It’s about the most gratification you can ask for as an artist, in my opinion. It’s hard to envision how people will respond when you’re in the writing/creating phases of a song, but when you see people in the audience singing along to that song that you’ve spent so much time and effort on, words can’t really describe it.

Along those same lines, how do you feel your live shows differ from your CDs?
Kevin: Our live show compared to our album is like Barry Bonds hitting compared to Barry Bonds hitting on steroids. Sure Barry is going to hit some home runs without the juice, but when you stick a needle in him, that’s when the real fireworks start. Our CD is awesome and we’re really proud of it, but our live show really brings the album to life. It’s our opportunity to take chances that we couldn’t take in the studio.

Life out on the road can be very difficult. What keeps you going on those long drawn out tours? Do you have any inspirational stories that have taken place on the road that you would care to share?
Kevin: This story, I don’t think I’ll ever forget because overall it was probably one of the most frustrating experiences of my life. It was our first trip down to Nashville and we were about to start the tracking process for our record that week, and it just so happens that I came down with the worst case of bronchitis known to man. To add insult to injury, we were about 4 hours away from home en route to Nashville when my old not-so-trusty Ford Explorer decided that it was going to call it quits at Midnight on a Saturday night in the middle of nowhere (aka Seymour, IN – Home of John Mellencamp) with nothing open. Luckily we were close to the exit ramp and were able to coast into a hotel for the night. The next day we took the truck into the shop and our producer picked us up to take us the rest of the way to Nashville. When we got into town, we ended up renting a mini van (which was pretty rad I must add) and driving it back to Indiana where we left the explorer a few days back. After footing the bill for the vehicle (600 bucks!) repair and picking up the Explorer we drove about a mile on the interstate only to have the truck stall out again. At this point, we’d had enough! We had the truck towed back to the shop where we proceeded to lay it to rest. I’m reminded of this story every day that I turn the key in our new Chevy Express Van because it was on this trip that we officially got our first “band van” in Seymour, Indiana and appropriately named it Seymour. I realized at this point that the trials and tribulations of being in a band had officially began.

We have all heard the stories about back stage antics and groupies. Is there any truth to those stories and if so do you have any outrageous stories or tales that you would care to share?
Kevin: All I can say is that it can get a little out of hand from time to time, but then again isn’t that what rock n’ roll is all about?

The public perception of life on the road differs greatly from the reality of it. Can you tell me a little bit about how you travel? (Bus, Van etc…) What accessories do you equip your ride with to make the time go by? What are the living arrangements like while on the road?
Kevin: We travel in our 2004 Chevy Express Van (See question 5) named Seymour equipped with our little red trailer. Some of the essentials that we never leave behind include the Tom Tom Navigation system, which always comes in handy when you’re traveling to a new city, an air mattress, a cooler, and from time to time the XBOX 360, oh yeah and who could forget the CD collection. To keep a watchful eye over us and to look out for the fuzz, we have the green frog that sits atop the dashboard and accompanies us on all of our road trips. To make the time pass, we generally listen to music, mess around with our phones, and look out the windows at the passing corn fields. When we get to the city that we’re playing, we try to get a dumpy hotel if we can afford it or shack up with friends in town in we have them in that city.

Do you have any special rules or rituals that you follow while you’re out on the road?
Kevin: We mainly just try to respect each other and just get along, which can be difficult after being in a van with the same people for long periods of time. We always make sure we eat something light and healthy before we play to make sure we’re in good shape when it’s time to take the stage.

What is a normal day on the road like for you? Can you walk me through it?
Kevin: Packing the van, unpacking the van, playing the show, re-packing the van, sleeping on air mattress’s, uncomfortable beds and/or floors, getting very little sleep, packing the van, driving all over god’s creation, and then doing it all over again. We do get a few games of Frisbee in as well.

Do you find it difficult being away from family and friends for such an extensive period of time? How do you cope with the separation?
Kevin: Luckily with the technology we have these days, it’s not as difficult because most of our family and friends are only a text message away. It is hard at times to deal with missing out on family parties and stuff like that, but then again our families understand that this is our career and our passion and support us all 100%.

What is the one thing you travel with that you just can’t live without?
Kevin: Obviously our instruments. NO I take that back, car air fresheners. They come in handy after we eat bologna sandwiches all day, and they make for a good cologne if you get in a spot!

What does the future hold for you guys as a band?
Kevin: A lot of live shows. We love to play out and we love to travel. We’ve been self booking over 100 shows a year over the past few years, and we’re looking to do a lot more of the same this year. We’re going to be shooting our first music video, shopping our record to record labels, and writing the next record.  [ END ]