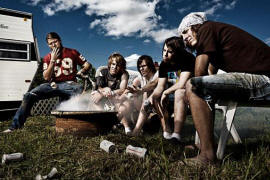 Straight out of the prairies of Canada, Saskatchewan’s “The Holly Springs Disaster” is making quite the impact on the hardcore scene in the East. The have been here three times over 2007, during which time the group released their first full length album, Motion Sickness Love. The CD is jam packed with melodies and riffs that almost take your mind to a whole different place using solid breakdowns capable of knocking every picture off your wall. With a unique style to the CD and lyrics that can start parties on their own, you bet your ass you’ll see these guys getting down and dirty in a city near you. I spoke with frontman Michael Froh and bassist Andy Foord and it went a lil something like this….

First thing is first, how is the tour doing so far…anything exciting you can tell me?
Andy: Tour is awesome! The Maritimes, I’ve never been out there before, but we were playing with Protest the Hero and you know they have been out there dozens of times. There was about 250-300 at all of our shows.

Mike: Yea the towns out there are small.

Mike: We played this one town with only 3000 people and 300 people showed up to the show and that’s like… 10% of the community coming out for that show. It was a really good turn out.

You guys have been here 2-3 times over the past year, each time drawing more and more of us out. In your eyes, what separates the diverse southern Ontario music scene to your small local scene back at home?
Mike: I would say it is slowly becoming the same. The only difference for a band is you have to drive 5-10 hours between every show, and well Saskatchewan, Alberta, and Manitoba you’re driving far distances until you hit… Barrie. There aren’t many markets to play.

How many major cities are there to play out there?
Mike: Well in Saskatchewan there’s like 5 major cities and after that it’s just towns. Like Weyburn which is my home town, there’s about 10,000 people that live there and it’s probably the second… no third best place to play in Saskatchewan.

You guys probably had something to do with that, being your home town.
Andy: Yea man, we did a Halloween show and a Christmas show and they were awesome!

Mike: There was like 350 people that came out to the Christmas one. It’s beginning to expand in terms of music. Usually you’d come out east (and we refer to east as Ontario), you’d be like… “Oh this is what the scene is like.” But now when you play a home show out there it’s normal, you know all the kids know every band that’s out there.

Andy: Yea man they know where they are, who they’re friends with.

Mike: I think it’s definitely due to myspace and the Internet… that what is helping kids grasp on to what music is about.

You guys support God’s Girls, man those girls are fit, eh?
Mike: See I’m like the only one who supports I guess fully. Everyone else has a… wait well I have a girl to… but let’s see I’ll take the answer on this one. I love them, they’re great, they’re beauties… but you know what, there are some let downs in every aspect of everywhere, you know what I mean?

Your new album Motion Sickness Love debuts on September 18 2007, what was the whole meaning of the album?
Mike: Meaning? Hmm… I guess you could say we wrote 5 of the 7 songs on the album before we started playing shows. We sat in a basement, and just jammed out like 6 songs. We started touring them and haven’t stopped touring since then. Then we took a couple of months off and wrote those other 2 songs which were “Up In Smoke” and “I D.A.R.E. David Bowie to Drive Drunk.” We wrote those two and then went and recorded the album. I guess those two songs have a little bit more influence on us.

Can you tell me what song stood out the most to you and what it meant?
Mike: For me, for a meaningful song… “I Feel Like I’m Taking Crazy Pills”, that song was basically the most blunt way of putting something I went through. I went through rehab and that’s basically what every song was written about. I lived in a small town and you get fucked up way to much, you know like there’s nothing to do you just get all into those drugs. That’s what you come by when you live in a place as far away as Weyburn. I went through whatever, went through rehab but that’s not what changed my thoughts on things. It was like once we started playing I was like holy fuck I need to play music and stop being a shit bag. That’s what I wrote about, me being a shit bag back in the day.

You guys recently signed to Underground Operations, how is that going for you?
Mike: It’s great, we were actually in Toronto today, sorted everything… I’m feeling good right now, less off your back and you just know what’s going on. It’s a nice family.

Andy: I feel like I have a mom and dad.

[in come guitarists Josh and Tony]

Josh: Oh really, I thought you guys just wanted to fucking get high.

Andy: [laughing] And do an interview!

What can we expect from you in the future?
Mike: Basically we’re touring until the end of the year, which is new years. Then we’re going to take a couple months off in the winter and write a full length. Then our goal is to get the CD out to the States, here and over seas… everywhere! I just want to tour the fuck out of the world.

What message do you have for all of the readers of PureGrainAudio?
Mike: Uhm that’s a toughy… Oh boy I don’t know man. Andy you take it.

Andy: Uhm… the hardest question is always last. Maybe say something actually important then something else… I don’t know.

Mike: Alright well, you should go pick up our album September 18. Or come check us out on tour in September and October… and November. And if you do, let’s party, strictly partying. Except we’re not going to have the school bus. If anyone wants to buy our school bus, Marijuana smoke included… message us!  [ END ]