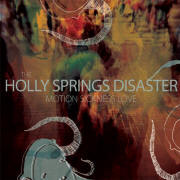 The good, the bad, and the hardcore—Motion Sickness Love is full of tobacco-spitting lyrics, six-shooter breakdowns, and some very dirty southern swagger. My dear God, this album is fucking gritty.

Kicking off with a teaser intro track before coming at you guns blazing with “Up In Smoke”—which I’ll constantly attest to having the best opening and closing thirty seconds in heavy music—The Holly Springs Disaster deliver a record that is forgivably predictable thanks to its confidence and cockiness.

Lines like “I am rock and roll/The son of sex and drugs/And it’s your daughter that I want/And it’s for sex and not for love,” or, “She’ll shed virgin’s skin without feeling like a whore,” may not deliver much artistic punch, but I’ll be damned if I can keep myself from singing along.

Much like stand-up comedy, music often finds its appeal in delivery as much in content, and this record exemplifies this fact by delivering a beautifully simple record loaded with staying power, based strictly on chunky production and tight, confident delivery.

The tough guy vocals work, the breakdowns invoke chest beating, and a refreshing performance from the kit ultimately makes this album a delight. The band may not offer many new ingredients to aggressive music, but it combines some of its staples for one hell of a recipe. We’ll call it Southern BBQ, and it’s finger-licking good.  [ END ]