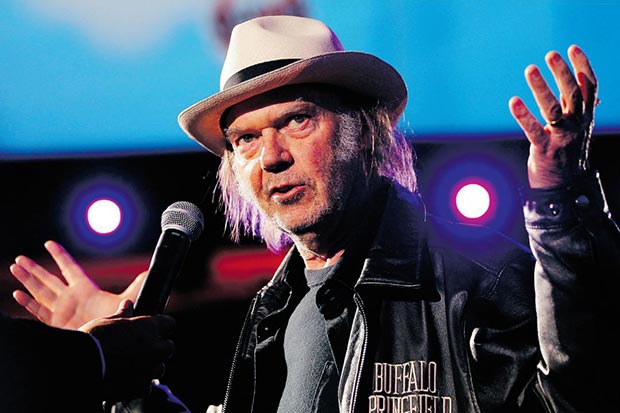 Neil Young is easily the most influential musician in Canadian history. Born in Toronto in 1945 to sports writer Scott Young and his wife, Rassy, he spent his childhood in Winnipeg before returning to Toronto as an adult. While living in Toronto, he played a wide variety of bars and coffee houses, primarily in the district that is now known as Yorkdale. At this time, Young signed a record contract with Motown as part of the Mynah Birds, which featured Rick James on vocals. The contract, however, fell through in 1966 when James was arrested for draft evasion. Shortly afterwards, Young ventured to Los Angeles with the Mynah Birds’ bassist, Bruce Palmer, to try and establish a career in music. Upon arriving in LA, they formed a band called Buffalo Springfield alongside fellow musicians Stephen Stills, Richie Furay, and Dewey Martin.

Buffalo Springfield was signed to Atlantic Records after playing a seven-week stint at the legendary Whisky a Go Go in LA, which wrapped up on June 18, 1966. Although the band was short-lived (they broke up in 1968), a mere two years after forming, they released three albums all of which were featured on the Billboard Top 100 list. A compilation album entitled Retrospective: The Best of Buffalo Springfield was released in 1969, and it peaked at number 42 on the Billboard charts.

After the demise of Buffalo Springfield, Young signed with Geffen Records, during which time he was sued for creating music that was non-commercial and unrepresentative of his prior works. He left Geffen, and Reprise has been his home label ever since. Young released his self-titled solo debut in 1968, but the album did not rank on the Billboard charts. Since then, he has released more than 30 solo albums; only three of which did not make an appearance on the Billboard Top 100 list. Seven of the albums, however, were featured in the Top 10, with Harvest reaching number one in 1972 and going four-times platinum in 1994.

In 1969, Young was asked to become the fourth member of then-trio Crosby, Stills and Nash. He accepted and has contributed to five albums with the band. Three of the five reached number one on the Billboard charts: Four Way Street, So Far, and Déjà Vu, which went four-, six-, and seven-times platinum respectively. Although his time with Crosby, Stills, and Nash has been fairly touch and go since day one, Neil Young has maintained a relationship with the band throughout his professional career, sharing with them some of the more memorable moments in Young’s musical history. Most notably, Crosby, Stills, Nash and Young played Woodstock together in 1969. The band took the stage at 3 a.m. on Monday, August 18th, nine hours later than their scheduled time for Sunday evening. The festival was only their second show ever performed together. They played an acoustic set followed by an electric set, but were never filmed as Young felt it would distract from the band’s performances. Thus, only the people who actually attended the show will ever be witness to that historical event.

Throughout his long and illustrious career, Young has been the recipient of many awards and accolades. He was inducted into the Canadian Music Hall of Fame in 1982; he has been inducted twice in the Rock and Roll Hall of Fame in the United States – once as a solo artist and once as a member of Buffalo Springfield. In 1994, he was nominated for an Oscar for his song “Philadelphia” from the movie of the same name. He has received two honorary doctorates – a Doctorate of Music from Lakehead University and a Doctorate of Humane Letters from San Francisco State University. Harvest Moon, the long-awaited follow-up to Harvest, won the Juno Award for Album of the Year in 1994, as well as Junos for Male Vocalist of the Year in 1995 and Best Male Artist in 2001. He has also been featured in numerous magazines, radio lists, and television specials, each of them declaring Neil Young as one of the greatest singer/songwriters of all-time.

Throughout his magnificent career, Neil Young has single-handedly changed the face of music. On a global level, he is a musical alchemist; everything he touches turns to gold. This is evident through his works with Buffalo Springfield and Crosby, Stills, Nash, and Young, both of which were highly influential bands, as well as through his solo works. In his almost-sixty years as an established musician, Neil Young has bridged the gap between genres ranging from folk to rock to blues, and everything in between. What’s more, he is noted as one of the primary influences for the Seattle grunge movement of the late 20th century, which put forth bands like Nirvana and Pearl Jam.

Young has always used his celebrity status to try and influence positive change in the world around him. In addition to releasing hordes of politically-based material in an effort to open society’s eyes to the injustices of the world, he has also been involved in a wide range of benefits and charities. These include performing at 1985’s Live Aid to raise money for famine relief in Ethiopia, co-founding Farm-Aid, which was a benefit concert to raise money for independent farmers, and performing at 2005’s Live 8, which raised money and awareness for the 31st G8 Summit, which addressed global issues such as climate change and the economic issues in Africa. Young also started The Bridge School with his wife, Pegi. The school is dedicated to helping physically and mentally handicapped children. Young has been arranging annual concerts since 1986 in order to raise money for the school. Artists who have performed at these concerts include Tom Petty, Bruce Springsteen, Billy Idol, Metallica, Red Hot Chili Peppers, and Lou Reed. Young also owns his own record label called Vapour Records, which has signed artists such as Tracy Lyons, Jonathan Richman, and Tegan and Sara.

Young has also had a resounding impact here in Canada. At a time when the Canadian music industry was still being formed Neil Young was a pioneer, breaking down barriers and paving the way for many more amazing artists to try and follow in his footsteps. None, however, would even come close. With his broad range of solo works, combined with his participation in many other highly influential bands of the time, Neil Young has established himself as being the most influential musician to ever come out of Canada, if not the world. He has been dubbed one of the greatest musicians of all-time in magazines like Mojo, Paste, and Rolling Stone. At a time when Canada was not even regarded as a contender in the global music scheme, Neil Young single-handedly brought his native country the recognition it had long deserved. Most importantly, he is still doing so today.

1. Neil Young had a rock of cocaine stuck in his nostril when he performed “Helpless” at The Last Waltz (The Band’s farewell concert) in November 1976. Release of the film had to be delayed until Young’s performance was edited, frame by frame, via rotoscoping.

2. Young founded the benefit concert Farm Aid, along with John Mellencamp and Willie Nelson. Since 1985, Farm Aid has raised money for family farmers in order to save them from being overrun by big-box factory farms.

3. The song “Ohio” was written as a protest against Richard Nixon and was released just a few weeks following the May 4 Massacre in 1970, during which four students were killed and nine others were wounded after being shot by the National Guard. The students were shot while protesting the United States’ invasion of Cambodia, which had been announced during a public address by President Nixon earlier that week.

5. Upon hearing Young’s song “Sugar Mountain”, Joni Mitchell was inspired to write a song entitled “The Circle Game”, which later became the title track for an album by Tom Rush.

Neil Young is known for his musical diversity, but if you’re just getting started, pick up a copy of Decade (1977). This album acts as an auditory scrapbook of a decade of his work (1966-76) and features his hand-written liner notes, explaining the relevance of each song.