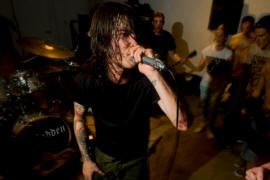 Interview with Go It Alone frontman Mark and drummer Luke

On August 23, 2007 Go it Alone made their debut appearance in Toronto on their last tour as a group. In June of 2002 two friends wrote twelve songs and recorded six of them. The result was the Go It Alone. They called the demo Hollywood North. No shows were played, about 100 demos were mailed out and the friends went their separate ways for the better part of the year lured by world travels and other core-based projects. In February of 2003 the friends revised their direction and ended up taking on new life to the group, forming a real band. With a full line up they played their first show on April 15th, 2003 at the underwear farm in East Vancouver and toured both east and west coasts on the Hollywood North demo. Since that time, GIA has toured countless times in both North America and Europe, suffered through a sickening number of lineup changes, endured extreme neurological trauma and released one EP, one split EP with Blue Monday, two comps and a full length LP. A second full length LP was recorded and the result was Histories. That was the last CD Go It Alone made. The band played their last show in Vancouver on December 1st, 2007. Good guys and great music, R.I.P. Go It Alone 2002 – 2007.

I’m here with Mark and Luke from Go it Alone. A Hardcore band from Vancouver, Canada on their last tour making a last good impression on the east coast. How has tour been so far, anything interesting you can tell us?
Mark: It’s been really good over all, the highlight has been getting to go to some eastern cities that we have never had a chance to go to before. We played in Halifax and we played in St. Johns, a show in P.E.I. So for me that was a highlight because we’ve only been a band for about 5 years and for some reason we haven’t even done a comprehensive tour in our own country so that was definitely a highlight.

What’s the response been like to the new album, Histories?
Mark: Um… I think it varies, that’s a good way of putting it. There have been some people who really liked it and then I think there have been quit a few people who were disappointed that it wasn’t the same record that we released last time.

Luke: I think, what Mark pointed out… with the last record everyone says Vancouver Gold was better and with this one there is a lot of reviewers saying that the last one was better and I think a lot of it has to do with the recording being super clear and digital. I think people seem to really get off on that. We went into this album trying to make it a little more live and warmer sounding and stuff. I guess since people can’t hear everything, like every single thing, are a little put off by that or at least some reviewers.

Mark: The thing I noticed is most of the songs that reviewers say are throwaways are my favorite songs on the record. Most of the slower and a little bit more weirder songs…

What were your influences on the Histories record?
Mark: For me the influences were Battery, it’s been a consistent influence since we started the band, as well as Damnation A.D. and Soundgarden. Those were the 3 main influences.

You guys are signed to Rivalry Records, are they good to you?
Luke: Yea they were really good for what we needed to do, it’s run by one of our closest friends who is somebody we can trust so there is no risk of being taken for a ride and there is really nothing we have ever asked for that they haven’t said no to or have said no to. [laughs] So you know they are the reason we can do what we can do like go to Europe and do these records and so that’s why we’ve stuck with them.

I have to ask, how come you guys are done?
Luke: I think it’s just time… I don’t know… like… it just is. We’ve far surpassed the goals that we set for ourselves when we were much younger and… I think that’s about it. [laughs]

Mark: I think another key factor for me is that in the past with all the records we released, I was never fully satisfied with them… they never quite ended up the way that I had envisioned them in my mind. Then we wrote two new records which just came out (the single and the LP) and finally I think we achieved the vision I had in my mind since day 1. So now I feel I can quit and not be left feeling I have unfinished business.

That sort of answers my next question, have you done what you set out to do?
Luke: Yea, initially we were going to do a demo and then do a LP, with just the two of us and then somewhere along the line it turned into a band and then we were only supposed to just do a LP and then go to Europe, and we did that. Then we put out an LP and went to Europe a couple more times, toured the States, and then now Canada. Canada was like a final one that came to light in the past couple years just because it’s like Vancouver bands don’t really focus to much on the rest of Canada because we’re right along the west coast, so you know you can just tour the west coast circuit so easily. I mean if we were going to do one last North American tour, initially it was just going to be Canada but then we got on the tour with Fireworks and kind of tied Canada into that.

Were there any songs that you were lyrically most proud of?
Mark: I was thinking about this recently and I think “Beacon” is the song I am most proud of. I mean musically it’s one of the more unique songs… it’s a little bit noisier, a little bit more creative then some of the other songs. I’m really happy with how the lyrics turned out, I mean the lyrical theme is something that I really touched down on over the years so I was quit happy that I got to express myself in that song… and I think it was one of the more ambitious songs that we’ve released.

So I’d love to know what your future plans are, you guys done hardcore?
Mark: Yea we’re done. [laughs]

Luke: [laughing] Yea we’re through… we’ve got other stuff going, I own a band called Weight with me and Smokestack, who use to play lead in Go It Alone. Also, me and Mark and some other guys from In Stride and Circles have a straightedge project called Keep It Clear that we are doing. Eric is in Get the Most, Mark has a bunch of songs he is sitting on that I’m sure will turn into something at some point.

Any last words for the fans of Go it Alone and the readers of PureGrainAudio?
Mark: I just want to say thanks to anyone who stood by the band all these years… we put a lot of hard work and a lot of ourselves into the band and it’s just nice to see that it has made some kind of impact on at least a small number of people.  [ END ]