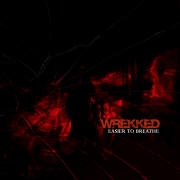 Just when I thought there wasn’t a lot more to be proud of, along comes Wrekked. A sick hard rock band from Toronto, Canada! I always get a bit excited to hear a new Toronto based band. Jon Langford (vocals), and his identical twin brother Mat (drums), have been singing for a long fucking time, giving the band quite some experience, and a possible edge. The complexity of Matt Dominici’s (guitar) riffs, added to Lenny Daniel’s (bass) superb bass lines, make this band a force to be reckoned with.

The first track on the album is “Twenty Twenty” and man this song is weird. Jon’s vocals at the beginning are insane. His lips are moving at the speed of light, making the lyrics rush through your ear before you even realize what hit you. I would actually really love to hear Jon scream, he’d likely have a great screaming voice.

Sixth up on the album is “Looking Up To You.” The intro is pretty tight, with the guitar riff starting out by itself. Once all the instruments have kicked in, the volume turns up a bit, until Jon’s vocals begin. The tempo slows down a little bit during the verse, but picks right back up when the chorus starts. With Jon singing out in front, and Mat slamming on the drums in back, the band is a train that can hit you from both sides at once.

“Superhuman” would be eighth on the album. And just what I asked for! Jon screams at the beginning of the song and he should for sure scream more often. His style is unique, and a bit different. The guitar riff is kind of creepy for this track, but I can’t really place my finger on why. You’d have to go check it out for yourselves. By far, this is the best track on the album.

To wrap up, I’d have to say great job to Wrekked. I’m so psyched to have this band from Toronto. That means I can go see them live sometime! Anyways, I recommend this album to fans of hard rock, people who listen to Switched, or even Godsmack maybe. I give Easier To Breathe a 7.8/10.  [ END ]