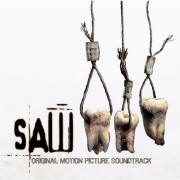 Over the past 3 years, the movie theatres have been taken by storm by blood and gore. With people getting five shotguns to the top of the head, six or seven people ingesting a poison into their lungs that will destroy them from the insides out, and a man hooked up to a shit load of chains to his limbs, including through his jaw. The Saw series is twisted, and demented, but man is it ever fucking awesome.

The music producers for Saw III chose a great line-up for the album. It suited the movie in every aspect, with dirty, grungy, disgusting songs.

The album stars artists such as Static-X, Blue October, Bullet For My Valentine, Lamb of God, Helmet, and 15 other amazing artists.

The Bullet For My Valentine track they chose for the album is “Suffocating Under Words of Sorrow” which is fitting, because the man in the movie being tested saw his own son get murdered, and can’t let go of it. He’s drowning in his own regrets.

The Blue October track that they decided to throw onto the soundtrack was fairly disturbing. It’s titled “Drilled A Wire Through My Cheek.” The first time I listened to the track, it wasn’t so bad at the beginning, but then he says “This wire is all that’s left of me/And it’s hooked within my gums.” The track is just as disturbing as the movie itself.

Overall, the soundtrack was perfect, for lack of a better word. The album portrayed the movie in perfect distinction. I give the soundtrack a 9.4/10.  [ END ]