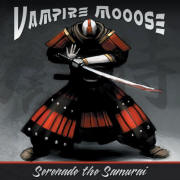 Have you ever heard one of those unique bands, that once you hear, you’ll never, EVER forget who they are? Did you like it? Well if you did, then prepare to adore Vampire Mooose. This unpredictable St. Louis based Metal quartet will rock your socks off. The current line-up for this new breed of metal would be Ryan Pulliam (vocals), Eric Baudendistel (drums), Brandon Manlove (guitar), and Al Carson (bass).

First up on the album is “Portauni.” Once the track first began, I was knocked off my seat at how different the instrumental was compared to the usual styles of metal. It’s a completely redefined breed of metal all together and Ryan’s vocal style is kind of unique as well; adding to the eerie style of the band.

“Monstersgotamutherfuckinbomb” is eighth on the album… say that three times fast! The first verse to the song is really philosophical, especially when Ryan says “We are the messengers of the war of the words and the war between the bird and the worm.” I found that line pretty interesting. The second verse of the track is a huge change from the beginning. Talking about pimps and hoes, it’s apparent that random works for these guys.

Lastly, on the entire LP, would have to be “Estaban was Eaten.” This track is an instrumental in its entirety… and a very good instrumental at that! The bass noticeably stands out amongst the rest of the band, which is a great thing to do. The bass bestows upon the song a bit of a groovy feel to it, sort of similar to a Southern lullaby if you will.

To conclude, I’d have to say that listening to this album, has got to be one of the most interesting experiences in my career with PGA. The band was far beyond miraculous, with their experimental techniques. I’m gonna give this album an 8.8/10.  [ END ]