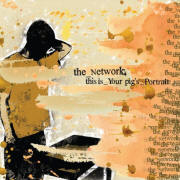 Lately in the world of music, there aren’t a lot of bands that play just for the sake of playing. The_Network on the other hand is not one of these bands. They really don’t care if their songs don’t make sense to you; ‘cause in their opinions, their music is just a form of expressing themselves, much like any art. They are just five guys that believe the world can get a lot better than it already is, and maybe one day their music will open the minds of the un-creative, and actually make a difference. These five positive dudes are Kevin Howley (guitar), Tim Meehan (drums), Scott White (vocals), Nate Johnson (bass/backing vocals), and Pete Marr (guitar/backing vocals).

First up on the album is an intro titled “We Are The Network,” which is mainly a bass riff. Not very often does an album opens up with a bass riff; already portraying the band’s creative instincts. The intro opens up into “Faith In Lust.” The song doesn’t really make a whole lot of sense the first time through, but the more you listen to it, the more it grows on you. At first impression, it’s just a jumble of power chords, palm mutes, screams, and howls. But in reality, it is much more than just that… it is art! A musical form of expressing one’s inner feelings; in the purest of senses.

Seventh up on the album would be “Dead Like You.” This track is really interesting and the instrumental is totally unique, and kind of weird. But as I mentioned with “Faith In Lust,” it grows on you after a few spins. It truly takes geniuses to come up with lyrics and instrumental such as those that The_Network puts out.

Thirteenth on the album… actually it isn’t one of their tracks. “00:00:56” is actually a song by a band that goes by the name of The Secret Life of Teenage Girls. It’s amazing how the band is giving other bands some time to shine on their own album. It’s interesting to notice that the song was named after how long the track actually was. It was only 56 seconds in length.

To wrap up this musical masterpiece, I’d have to say excellent job guys! The intensity and anger the tracks’ possessed was insane and the creative edge was sharp, and to the point. I hope these guys never run out of ideas. Keep tapping into those golden rivers guys! I give this album a 9.1/10.  [ END ]