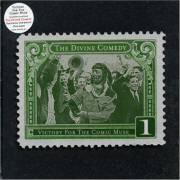 The Divine Comedy, an act who first started out in the 90’s are back with a new album entitled, Victory For the Comic Muse. You’ll probably remember their track “Something for the Weekend” off of their 1997 release Casanova which propelled the band into commercial success. And ten years later, their sound still manages to be their own unique sound.

What attracted me to review the album, touches home. The band name stems from an Italian Poet’s poem entitled Divina Commedia (The Divine Comedy) and if you know anything about literature and the middle ages, you’d know that this is one of the greatest works to come from that era.

The lyrics on the album’s lead-off track are quite funny, and because I want you to check out this band, y’all are going to have to do a little research. “The Light of Day” is such a clean, upbeat melodic song and as with every song on the album, it tells its own story. If you like peaceful, upbeat, and a touch of old school music, than this band is right up your alley.

Check out The Devine Comedy, the music and the story behind the origin of the band’s name. With either one, you won’t be dissapointed!

Besides the music, the message behind the actual disc is as honest as the music. It reads, “Thank you for buying this music and for supporting the artists, songwriters, musicians and others who’ve created it and made it possible. Please remember that this recording and artwork are protected by copyright law. Since you don’t own the copyright, it’s not yours to distribute. Please don’t use internet services that promote the illegal distribution of copyrighted music, give away illegal copies of discs to others for copying. It’s hurting the artists who created the disc. It has the same effect as stealing a disc from a store without paying for it. Applicable laws provide severe civil and criminal penalities for the unauthorized reproduction, distrobution and digital transmission of copyrighted sound recordings.”  [ END ]