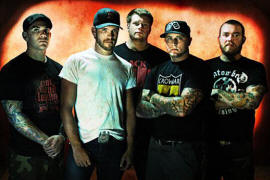 Interview with Since The Flood lead singer Chuck Bouley

One of the most burgeoning rock and metal scenes in the United States is currently going on in the Northeast parts of the country. This scene has already brought us All That Remains and the immensely popular Unearth and now the latest band to break out from this area is called Since The Flood. These guys have been around about five years now but have just recently began to turn heads and garner massive attention. Since its recent release, the band’s sophomore disc No Compromise has been doing very well for Since The Flood and the guys are just about to embark on a massive tour that won’t wrap up until the beginning of June. We recently caught up with Since The Flood’s lead singer Chuck Bouley for some Q&A about the band’s origins, their latest disc, and the recent split with their manager Howard Jones of Killswitch Engage fame.

Since The Flood formed relatively recently, around the year 2002, but can you offer some specific details as to how the band actually came together?
Chuck: Um, actually it was my friend Toby and I, we had been playing in other bands since high school and just the way our music was going along, you know just naturally progressing, we wanted to play harder and harder stuff. We ran into Dave at a show and asked him if he wanted to start playing with us and from there you know, he knew a bass player and a drummer and we just sort of put it together. But I mean, after we initially formed, we changed the lineup a few times rather quickly until we got it right.

I know you probably get this question a lot, but I have to ask about the name, Since The Flood. It’s a very original and interesting sounding name, how exactly did you come up with it?
Chuck: Ah, actually Dave our guitar player had the idea, I believe he was doing some research on some war and whatnot and he had come across a letter that was written to a soldier who was fighting in the American Civil War. The first line of the letter began “since the flood” and so on and he just kind of brought that up to us and we all agreed it sounded pretty cool so we just went with it.

You guys all hale from the sort of North Eastern, New England area of the United States. What was it like growing up in this area and then forming a band and what is the scene like there now?
Chuck: Oh the scene is strong here, the Northeast, I think we have the strongest scene in the country, you know, we’re not too far from New York, Connecticut, that scene, there’s always great shows that are within driving distance. Coming up, you get to see a lot of the great bands, I remember seeing Unearth you know, right when they came out and just watching them grow was amazing.

Speaking of the scene in your hometown, are there any bands that we might not know about now but are destined to break out in the near future?
Chuck: Um, geez, not that I can think of offhand, but we haven’t done too much touring lately so you know, I haven’t gotten to see as many bands as I usually do. There’s one band coming up that I know of that’s really great, they’re called One Dead, Three Wounded… a different style from us, but they got a really cool rock and roll vibe going on. They got sort of Black Sabbath type riffs; they’re really a great band.

Your band is now considered part of a sort of New England scene now along with Unearth and All That Remains and your bands have all developed a friendship with one another. How did you guys all meet in the first place and do you all still keep in touch?
Chuck: Ah, we actually… Dave our guitar player had filled in for Unearth on one of their full U.S. tours back in the summer of I believe it was 2002, we had just formed and we had a demo at the time and it was real shitty, but you know Dave was on tour with them and he played it for Trevor from Unearth and Trevor offered us a deal with his new label Ironclad. At the time, he had one other band, maybe two other bands signed besides us. But yeah, we keep in touch with those guys pretty regularly, we just played with them a couple of weeks ago but it’s hard now that they’re on tour all the time now and we’re playing more and more. But yeah, we get to see a lot of the local acts, we keep in touch via phone you know pretty regularly.

Let’s talk a bit about your latest album No Compromise since the disc just dropped two weeks ago. Now that it’s out, how do you personally feel about the record and how do you think it compares to the band’s debut album?
Chuck: Um, I love the new album, I think it’s got balls, it’s really heavy! Compared to the last album, I want to say that we’ve matured a little bit in the sense that we don’t have so many of the televised breakdowns. There’s still plenty of chugga chugga but you know, when you hear it, you can tell it’s us, I think we have our own signature that we put on our music, once you hear it, you can tell just from the guitar tone and the pace and changes that it’s Since The Flood. I love the new album!

What was the writing and recording process like for No Compromise? How did it differ from the process on your first album Valor & Vengeance?
Chuck: Well with Valor & Vengeance, we had been playing those songs for quite a while before we actually went in to record the full-length, so it was a little bit easier recording process with that because we had played the songs so many times live and we had the opportunity to change them so many times before we actually got to the studio. I’d say it was a little bit easier to write but on the other hand we had been touring on Valor & Vengeance for three and a half, four years basically, so we were all gung ho to write a new album. We were all into it, we all put our heads into it and it came together really well. It was a little bit of a tougher time in the studio though, we had to tighten up some loose ends, there were actually a couple of songs on the album that I never even got the chance to practice the vocals with the band, but I feel that they came together well. One song was actually completely written in the studio which is pretty amazing; I think once it came down to crunch time, we pulled it together well.

I noticed that the production work is particularly tight on the new album. Who did you get to produce the record and why did you decide to go with them?
Chuck: Um, we produced it, Jim Seagal recorded it and engineered it, but we did almost all of the production.

What was it like for you to produce? Are you use to the studio or was it a new experience for you?
Chuck: It’s tough to oversee your whole music so what we would do is bring in friends of ours that knew the band, knew our sound and just um, you know every other day or so that we were in the studio, we’d bring in a friend because there are so many kids in the area that have seen us a million times. They know how we sound, the sound we’re going for and you know, we’d just say “how does that sound to you?” You know, it’s really hard to pick apart your own music, but our drummer Luke is actually very familiar with the studio, he actually went to school for sound engineering. Luke has a great ear for music with the help of Jim Seagal, Jim Seagal is just amazing so it came together well.

I read that the title of the album No Compromise was inspired by the band’s unwillingness to adjust their sound and make it more appealing to the mainstream. First of all, is this true? And secondly, has the band personally felt this pressure to conform to a more radio friendly sound from record people?
Chuck: Ah it’s not so much that pressure to change our sound and everything, I think it’s more pressure from our fans, we get a little bit of shit from the fans you know, because a year ago we did a video and we just wanted everyone to know that because we were signing onto Metalblade, we’re not your typical Metalblade band, we just wanted everyone to know that we’re still going to play the music that we love to play no matter what label we’re on, no matter what we do. We play what we want to play and that’s the bottom line.

A lot of people might not know this about Since The Flood, but your manager is none other than Howard Jones of Killswitch Engage. How did this whole partnership come about exactly?
Chuck: We actually just parted ways with Howard a little while ago, but yeah he was our manager for the past two years. But um, Howard had seen us play I want to say about two years ago, two and a half years ago, we played a show down in Western Massachusetts and this is when we were still building our name you know and the show was off the hook, kids were going nuts. So Howard could tell like from our live performance that we were the real deal and he approached us, wanted to work with us. But yeah, it worked well for a couple of years, I have nothing bad to say about the man, we just decided to part ways.

Things seem to be going amazing well for you guys right now. What do you have planned for the near future and the rest of 2007?
Chuck: We’re going out in about two weeks, we’re going to start touring with Madball, we’re doing a little East coast tour with them, a short ten day run. When we get back from that, we got about a week off and then we head out with, well it’s still kind of tentative, I don’t know if I should even talk about it, but we have plans to do a tour with our buddies in 7th Star and Ramallah, I don’t know if you should actually print that though. [laughs]  [ END ]