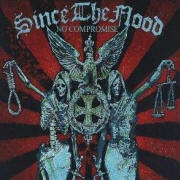 Hailing from New Hampshire/Massachusetts, Since The Flood is a Hardcore/Metal band that has just been recently signed to Metal Blade Records, one of the most intense record labels for Metal bands. Now as many, many people already know, gerenres such Metalcore are growing day by day, adding at least ten new bands to the genre a month… maybe even more. Since The Flood however, transcends these trends and is for sure a band worth checking out.

“Gone Tomorrow” is the first track on the album. The opening track is always one of the most important songs on a disc; if the listener doesn’t like the first track, he or she will likely stop listening to the album. “Gone Tomorrow” though, is a pretty good song to kick off the LP. The drums are insane, with speed and intensity that could blow your mind. The vocals are indeed an important factor for bands, because without the vocalist, your band is likely going to fail miserably. The reason I say this, is because the vocals for Since The Flood, produced by Chuck Bouley, are pretty damn good; sort of reminds me of the vocal style of Hardcore legends Hatebreed.

Seventh in the list would be “Laid To Rest.” When I first read the track title, I thought to myself “Holy shit. A band covered Lamb of God’s “Laid to Rest” already?” But I was wrong! The track is completely original, and amazingly brutal. With bone crunching guitar riffs, perfect timing from all the pieces, and vocals that can make the deaf tremble, I’d say by this track alone that Since The Flood have a lot going for them.

Lastly on the disc would have to be “Guardian Angel.” This has probably got to be the most upbeat track on the album. It’s fast, catchy, and just plain fantastic. The only downfall I found was the instrumental was a little bit repetitive, but still a great track to listen to. Chuck’s vocals also, are a little bit monotonous; he doesn’t have a wide range of pitches, but in the end, this is Hardcore!

Just to add a tidbit of insight, the album artwork on the cover is amazing. The mirror reflection down the centre of the cross symbolizing good and evil was a great idea. Overall, I’d have to say the album was pretty damn good. For this band being in the works for only a few years, I’d have to say great job and this was for sure an improvement upon their last disc. I give this album a 8.5/10.  [ END ]