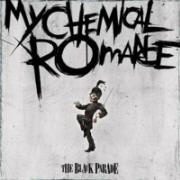 I was curious to see when selecting CDs for review, a disc entitled “Mark Carson: The Black Parade” bearing a similar title to My Chemical Romance’s new album The Black Parade. As I take the CD out, the track listing for MCR’s Welcome to the Black Parade is right in my face, just with Mark Carson’s name on it.

Now if I may, here is where I will rant… hello record people! What the hell are you doing watermarking a CD with the wrong freaking artist! Especially when the release is so highly anticipated. I can see my music professors turning an ear just at the mere fact of the grandiose error. I’m working for free trying to get into a label, while people who don’t really care about bands are doing the work, and wrongly I might add.

Alright, this is MCR’s third album, second on label Reprise/Warner, and I must say, I set the bar pretty damn high for this release. I was amazed with what they offered last time around. Its overall feel is very theatrical and real, and everything around it was tweaked until perfect. I have always been a fan of Ray Toro, not only with his skill but the way he can come up with his own riffs unlike most bands out there. I swear he’s straight out of the 80’s, I hear Queen, I hear old school rock and love it. Cinematic band, clearly!

Liza Minelli makes an appearance on the album, quite possibly why lead vocalist Gerard Way sums up the album as; “…is way more dramatic, way more theatrical, completely over the top, borderline psychotic.” Guess who supplies the drama… Mizz Minelli!

Just by opening the album, whether you picked up the white or black copy, you can see how intricate each detail is, and how much work and soul went into this record… this concept record. It’s one of those discs you have to listen for yourself, I can sit here and type how much I like it, and what I don’t like, but it’s up to you peeps to have a listen for yourselves. All I can say is that it’s worth the listen, even if you’re a person who skips tracks like a champ, I guarantee it will have you wanting more.