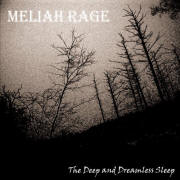 Certain types of Metal evoke an “epic” feel about the music, especially the genre Power Metal. Such bands include DragonForce, Queensryche, Iced Earth, and Symphony X, amongst many others. Another band which sort of fits in the realm of “epic” metal would be Meliah Rage. As I mentioned before, Power Metal tries to demonstrate an “epic” type sound, and Meliah Rage certainly accomplishes this vibe.

Formed back in 1985, out of Boston, Meliah Rage has been dishing out mayhem for 22 years. The current line-up for this chaotic band would be Paul Souza (vocals), Anthony Nichols (guitar), Jim Koury (guitar), Darren Lourie (bass), and Stu Dowie (drums). And actually, at one point, Sully Erna, vocalist of Godsmack, played drums on their LP Unfinished Business.

First up on the album would be “Permanently Damaged” which is quite the track to listen to. I adored the instrumental; the guitar riff was insane, ranging from melodic, single-noted riffs, all the way to power chords and bar chords. The vocals are what really bring on that “epic” sense of direction. The drum style was quite fun to listen to; it was of an older style, more traditional for their genre.

Fifth up on this epic album would be “Twisted Wreck.” The intro, I found wasn’t really that interesting at the beginning, but it turns for the better after about 25 or 30 seconds. The guitar riff actually somewhat reminded me of something Van Halen would play. I rather enjoyed Paul’s vocals on this song. Also, the back up vocals in the chorus were kind of different; the band was just chanting ‘Twisted Wreck.’

Overall, I’d have to say I was fairly impressed with Meliah Rage’s latest album, The Deep and Dreamless Sleep. They are no DragonForce, but they certainly have a great sound! I’d have to give this LP a 7.2/10.  [ END ]