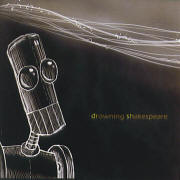 ROBOTS!! Well, actually just one robot, and unfortunately it’s not real. However, an illustration of a robot is what takes up approximately half the cover of the self-titled EP released by the band Drowning Shakespeare.

This band is from Nova Scotia, yeah, that’s what I thought too. I have never even heard of another band from the Maritimes. I’m sure there are many but none with the amount of positive attention as Drowning Shakespeare. Personally, I was quite curious to hear the Maritimer’s take on Hardcore. Let me tell you, this album did not disappoint me.

The initial track, “Falsetto, Not Omnisteto” opens with some effects that left me anticipating the distorted recording of the words “Fox Kids, Fox Kids” which can be found in the end credits of the Saturday morning cartoons on the Fox Network. This is followed by some actual music, thankfully. After about a minute of instrumentals and a couple woos comes a few short lyrics to finish off the song.

The next song is entitled “Cheap Motels Don’t Bother Me In The Least.” Here’s a secret, the title gives away the theme. This song is actually my second favourite on the entire album. I’m sure you’ll find yourself chanting the lyrics “You in the backseat sounds like heaven to me!” At least, I hope I’m not the only one doing that in public. That’s not the point, this song is good. I feel the vocals could use some improvement, but then again, I can still listen to it without being thoroughly annoyed.

“Trampolines and Other Unfortunate Redundant Mishaps” Wait! That sounds familiar. Oh ya! “Water Wings (And Other Poolside Fashion Faux Pas)” by Alexisonfire. Maybe I’m the only one who would’ve seen the similarity right off the bat, but those who wish to contradict me may send letters to my pile of unanswered fan mail.

Now, my favourite song on the album, “Mom, It’s Not 1990 Anymore.” The title sounds like something I would tell my parents. I must say though, when you hit the back button on your CD player to replay this song, you will definitely want to crank the volume. For you kids that download music, a CD is what music comes on before someone screws over the industry with mp3s for your unpaid for enjoyment.

“I Hear You Pack A Pretty Hard Punch” definitely doesn’t live up to its name until about half way through the song. At this point it becomes an amazing song, then slows and then kicks up again, followed by another decrease in speed. And of course, like any good album, the song (and album) finishes off with some wicked feedback from the guitar amps.

Overall, I enjoyed the music and look forward to Drowning Shakespeare’s live performance. The recording could’ve been better and a little improvement on the vocals is needed. However, that will improve itself over time. I have to comment on the band name though. Honestly, why would you want to drown a dead poet? But then again, it sure makes a kick-ass album title and yeah, a band name too.  [ END ]

01. Falsetto, Not Omnisteto
02. Cheap Motels Don’t Bother Me In The Least
03. Trampolines and Other Unfortunate Redundant Mishaps
04. Mom, Its Not 1990 Anymore
05. Buried Hearts
06. The Four Laws of Ecology
07. I Hear You Pack A Pretty Hard Punch