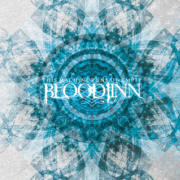 One of the greatest Metalcore bands I have heard to date would have to be Bloodjinn. These guys are insane! They utilize single note melodies, interchanged with power chords, and palm muting. Swiping former He Is Legend guitarist McKenzie Bell, this band is sure to bring on some amazing music in the near future, for sure making a HUGE footprint with this album, This Machine Runs On Empty. In addition to McKenzie Bell (guitar), the line-up is Joel Collins (vocals), Kyle Rakes (lead guitar), Brian Lewis (drums), and Justin Carter (bass). This North Carolina-based band is sure to tear up the Metal scene without a doubt in my mind.

First up on the album would be “In The First Degree.” The track opens up slow and quiet with some kind of pulsing sound that I couldn’t quite figure out what it was… possibly a heartbeat? After the little intro, the volume cranks up, and the beasts are unleashed to wreak havoc. The music style touches back to the foundations of Metalcore, unlike a lot of the new Metalcore shit that is diluted by society and poser wannabes. Joel’s vocals are absolutely astonishing, piercing through the air just to leave a sting in the listener’s ears.

“A Moment of Clarity” would be fifth on the LP, opening up with a riff that isn’t so much Metalcore that people can usually distinguish from a mile away. The angle taken for this track is unique, and fresh to the ear. The occasional pinch harmonic is an appealing change of instrumental, which a lot of listener’s tend to enjoy… getting a bit of a tingle up their spine when that squeal inches their way closer to their ear drums.

Lastly on This Machine Runs On Empty would be “See Through.” This track is probably one of the most intense and speedy tracks on the entire album and additionally probably the heaviest as well. The bridge is chilling to listen to, as Joel’s vocals deepen to show a more Death Metal side to his singing style. The outro was a pretty interesting to listen as well. With an acoustic riff playing, and with something that sounded similar to chimes playing in the background, the outro could easily be passed off as a lullaby for children to drift of into the land of dreams.

All in all, I’d have to say this album was out of this world! This being their first album in quite some time, I can’t imagine what this band will be capable of in another five years. I know in my mind that we should be expecting huge things out of Bloodjinn in our lifetime. I give This Machine Runs On Empty a 9.5/10.  [ END ]