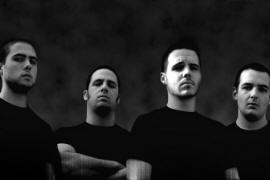 Interview with Beneath The Massacre lead singer Elliot Desgagnes

It might not yet be prevalent to everybody, but Canada is quickly developing into a well developed and flourishing scene for death metal. One of the fastest growing of these death metal groups is Montreal’s Beneath The Massacre, a four piece group of young guys who formed as recently as the year 2004. In their brief existence, Beneath the Massacre has shown a niche for hard work and tireless commitment to their music having released their debut EP Evidence of Inequity barely a year after forming. The group just released their debut full length record titled Mechanics of Dysfunction at the end of February and so far it has performed extremely well in both Canada and the United States. Recently we caught up with the band’s lead singer Elliot Desgagnes before a show in Toronto to ask about how the band formed, how they’re doing now and what they have planned for the rest of the year.

Just to start, you guys formed as recently as 2004. How did you guys come together and where you in any other groups prior to Beneath the Massacre?
Elliot: Yeah we were in a band, me, Christopher, Justin; there was only Dennis that wasn’t there. We had a singer, we kicked him out, and I was playing bass and then went to the vocals and Dennis who is Chris’ brother just went to the bass, that’s what basically made Beneath The Massacre.

You guys hail from Montréal, Canada and as of late, there seems to be a huge metal boom happening in that general area of the country. Do you feel this is a true statement and can you elaborate on the Montréal metal scene?
Elliot: Ah, I think there’s always been a lot of good bands from Montreal, when I was a kid there were a lot of bands but the thing is that I don’t think they were going anywhere else besides Montreal because the labels weren’t giving them… they weren’t signing these bands to any record deals. So labels such as Prosthetic who signed us kind of gave Montreal attention, people started to listen to more metal from Montreal but it’s just a matter of who the label will sign or not you know? And lately, these labels have started to sign a lot of Canadian bands overall.

You guys are a tech Deathcore band. For all of the metal novices or lazy-asses out there, could you elaborate on what “deathcore” or more specifically what your tech deathcore sound involves?
Elliot: Uh, it’s weird because we don’t particularly like to call ourselves deathcore or whatever; I think it’s pretty weird to give a band some kind of name like that. We don’t necessarily like giving a label to our music, we just play the music we like and people can call us whatever they like. I don’t know, some people call us deathcore; that might work for us better than techcore, I don’t know, I’m kind of messed up with this.

Yeah, a lot of people like to get caught up in labelling….
Elliot: Yeah, personally I don’t think it’s too much of a good thing to do; we just do our stuff you know….

How did you guys come up with your brutal and totally unforgettable band name?
Elliot: Um, well we wanted a name that at first wouldn’t be too obvious of what we meant, after a while we thought about something along the lines of Scratch the Surface or Beneath the Surface or something like that. By changing the word surface to massacre, the actual surface of our world is pretty much like a massacre, like the human condition and everything. So that’s pretty much how we came up with the name and we had a Texas Chainsaw Massacre poster in the jam room. It’s a good name to describe our world right now.

Your debut disc was an EP entitled Evidence of Inequity, and was released in 2005, under Galy Records just a year after you guys formed. How did all this come to fruition so quickly after you came together as a band?
Elliot: We made a band and we wanted to go into the studio as fast as possible. We didn’t want to pass through all the entire kind of demo phase before recording something. You know, we had been a band before and I just thought it was time for us to record something good that we would like to listen to. So we recorded after only a few months of being together and Galy Records offered to release it because he saw us at our first show in Montreal and he was blown away. I can’t see a better way to start the band than releasing a CD on Galy Records. For us it was the best thing possible.

As soon as early 2006, you inked a deal with Prosthetic Records. How did you come to choose this label, were there other labels interested, and how does it feel to be signed to a contract so soon after your formation?
Elliot: Yeah there were definitely a few labels that contacted us but Prosthetic was just, you know they’re all a bunch of nice guys that we really enjoy working with, not that I don’t like the other labels you know but everything was just simpler with Prosthetic Records which I really liked. Coming out of being with Galy Records, we didn’t want something too complicated and the people at Prosthetic are really nice and so we get along pretty well, it’s that simple.

Since signing with Prosthetic you released your first full-length album, Mechanics of Dysfunction just two days ago actually, on February 20th, 2007. What was the writing and recording processes like and how do you feel about the new record?
Elliot: It took an awful lot of time to finally get it out. I don’t know if you know, but we went into the studio in May, 2006, we tracked the entire CD with Yannick St-Amand who produced it and we went right after to do the mix at another studio. But after that, it’s been real quiet, there was a problem at the mix and it took a lot of time to fix that problem, it was a low end problem in the guitars so that’s why the CD came out so late in February because you know, we had this problem and we were just dying to release it.

Now that your album has just come out you will be touring Canada and the US for at least until the end of April. Are you excited to be hitting the road and is this the most extensive tour the band has yet to embark on?
Elliot: Yeah, we’re really excited and it’s about time for us to hit the road in the U.S., I know there’s a lot of people waiting for us to play in their cities so we get tons of emails every day from people wanting us to play in their city so it’s more than time for us to go there. So yeah, we’re really excited; we’re leaving to tour with Ion Dissonance for something like a three week tour in March/April. Then in April, we have a week off or so and then we’re going back out with the Animosity Tour with The Faceless and Blood Runs Black so we’re really excited.

Your Myspace page has already racked up over 220,000 visits. How does it feel to know that your music is taking off so quickly and do you think things would have progressed the same without help from tools such as Myspace and the internet in general?
Elliot: Um, I think internet in general really helps, at first I didn’t even know what Myspace was and then someone told me no you really have to put some songs on Myspace and you know, I was like, whatever, we’ll put some songs on and then I quickly realized how big that was and how much the internet would help us promotion wise. I think about the older bands that didn’t have this kind of promotion like over Myspace and the internet and you know, I look up to them because they really had to work a lot, I mean it was a lot more difficult. You know, new bands just put their songs on Myspace and it makes them popular, that’s why they call it the Myspace band now you know. Yeah, Myspace and all the internet stuff is a huge promotional tool for us.

Thanks for your time, but before you go and rip Toronto a new one, what do you guys have planned for the year to come and what would you like to see happen to the band in the months to come?
Elliot: 2007 is going to be a busy year for us; it’s all going to be about shows. We’re touring the States for three months this summer, three tours back to back and then we want to do a Canadian tour and then we’re looking at Europe. So it’s going to be pretty much all about touring, all about doing a lot of shows. It’d be our first tour of Europe, we’ve never been there. It’ll be interesting to see what the reaction is over there, right I know we get a lot of emails from the U.K. so I’m pretty stoked about going over there.  [ END ]