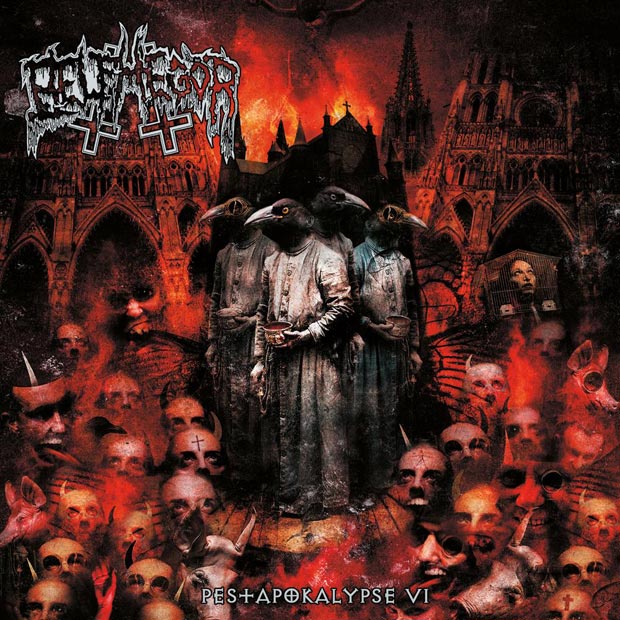 Belphegor… a demon which helps people make discoveries; what an excellent demon to name a band after. Belphegor is a black metal band from Austria, and the name Belphegor is really suiting. In other words, they discover more and more ways to bring the pain. This quartet has been on the loose, carving their name into faces of the innocent ever since 1993, but originally under the moniker Betrayer. The Satanists themselves would be Helmuth (vocals/guitar), Sigurd (guitar), Serpenth (bass), and Lille (drums).

First up on the album would be “Belphegor – Hell’s Ambassador.” The song actually describes very, very well what a Belphegor is; a demon who seduces people by suggesting to them ingenious inventions which will make them rich, also trapping them within their own greed. The leads in this track are unbelievable; both Helmuth and Sigurd share the lead lines, rather than just one lead guitar, throwing a bit of KAPOW into the mixture.

“Chants For The Devil” would be fourth up. Instead of starting off with a slow, melodic intro, the band just kicks right into the song. No pussies allowed for this track! The only thing I had a hard time with was the lyrics. It isn’t in English, and to be perfectly honest… I have no clue what language the song is in (maybe German?). But for major metal-heads, it’s the instrumental that really counts; something you can completely rock out to. This track has got to be one of the heaviest on the entire album.

To wind up, if I could say just a few words, they would have to be “Holy shitake mushrooms!” The timing is perfect, never faltering even the slightest and after so many years as a band, Belphegor still brings new levels of uncontrollable metal madness to all of its fans (and innocent bystanders). I’d have to give this album a HUGE 9.5/10.  [ END ]