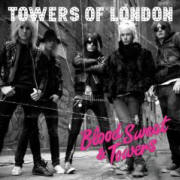 I’ve just reviewed 5 albums, and 3 of which are pretty badass, including this one. I see the CD cover and I think hair band. It’s so true; it takes me back to the days of when Poison was at the top of their game. Oh how I wish I were in my 20’s in the 80’s.

The cover alone will make you want to pick this up, but all kidding aside, you get 15 killer tracks.

The album slows down at track 5 “Fuck it Up” due to its acoustic version, it is a slow tempo’d song and it makes me kind of laugh with the lyrics and the almost serious tone in the vocals. The Banjo doesn’t help either.

Following the track is an orchestra-type song. You would think it would pick up a bit after that, but it mellows out and has a kind of shift in genre, it’s more rock n rollish.

At first glance you can’t help but make comparisons to Johnny Rotten, The Ramones or for anyone else in that era, but the obvious is obvious.

Guns and Roses, fused with The New York Dolls, and voila we’ve got another take on music. The clash between the two is excellently done on this record. It’s a mix; if you are down with that, then pick it up.

Come to think of it, at a time when “screamo” and anything else ending in “mo” is fashionable, you get a band that totally changes it up. It’s a big step for them, but someone had to do it, and I rather Towers of London them than anyone else. It’s catchy, it’s fun, it’s vibrant, go get it!