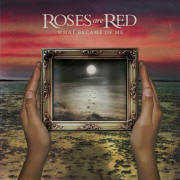 Roses Are Red – “What Became of Me”

Trustkill Records did it again with Roses Are Red… a band with a great deal of appeal. Some might think of Trustkill as a hard hitting label with hardcore music. Rose Are Red prove that you can still rock, and not be “crazy.” This is a CD that everyone can enjoy, ‘cause ultimately that’s what you want to do, enjoy the music.

I’ve always liked Alternative Press Magazine, because they showcase bands that wouldn’t normally get a shot in a real published print magazine. They labeled this release as “Most Anticipated Release” and it’s no wonder for, people caught a glimpse of Roses Are Red on tour with not only the Vans Warped Tour but other acts such as Story or the Year, Underoath, Silverstein, Matchbook Romance, Bullet for my Valentine, Walls of Jericho and more.

So let’s jump on the bandwagon and label this type of music, hmm I would have to say it’s part rock part, please don’t kill me for saying pop, so I’m going to say part mainstream. Ha! I didn’t say emo, ‘cause that is a term I will not use… over used and people are ignorant for using it.

Musically it’s clean, and the talent does shine through. Its been well produced, obviously regardless of budget. It’s a well produced, well polished album, one that they (and any group) can be proud of. It’s filled with catchy melodic tracks and is infectious and energetic!

The lyrics are really heartfelt. I love following along with the lyrics and they all pretty much tell a story. It does sound like a break up album, and in general the issue of growing up. But, as songwriters they are growing and will continue to do so with each release they shall put out.

If you haven’t seen the band live, go check them out! Their sets are usually quite entertaining. If they’re not already, they will be the next big thing. After all, they were Spin.com’s featured band of the day. Oooooooh!