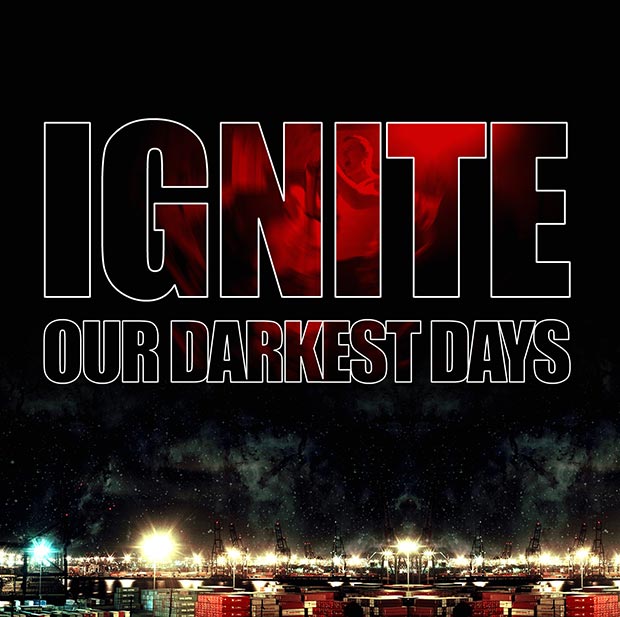 Ignite, who’ve been making music together for over 10 years, are a successful, international act with a diehard global following. They’ve got a proven, rabid fanbase that populates over 30 countries, thanks in part to their Iron Man tour scheduling. People go crazy for Ignite all over Europe, Australia, South America, and in their native US, and that’s why the band lives on the road, bringing the fans what they want and what they need.

Ignite’s new album Our Darkest Days opens with a one-minute intro, something that can be a little unnecessary but works rather well as a lead-in to “Bleeding,” a track that manages to thoughtfully attack one of the dominant themes of the album: fear and freedom. Accompanied by full gang vocals, Zoli tackles the issue with a lyrical nuance and restraint not usually expected from this music. The second track, “Fear Is Our Tradition” continues to look at the subject matter, and acts as a real showcase for Zoli’s talents, with intricately layered vocal harmonies and the other “theme” of the record: hooks. Ignite may be an angry, powerful band, but they want you singing along.

Six years have passed without a new album by the group (who do they think they are?), but the Orange County quintet has reappeared seemingly from nowhere with its fourth full-length (and first for new label Abacus). Despite containing hints of hardcore here and there, frontman Zoli Teglas completely bypasses barking vocals in favor of melodic singing, which makes it not hard to imagine such tracks as “Fear Is Our Tradition” and “Let It Burn” being played on a local mainstream rock radio station. That said, tracks such as the Bad Religion-esque “Poverty for All” sound custom-made for slam dancing at the Warped Tour.

This CD is really well put together and has an AFI sound to it in most parts. And if you know of Toronto’s best rock band Tacoma Redd you can hear a bit of that as well. The over all sound of the band is really tight and thick; drums are perfect, guitar tone is sick, and the bass is mint with that poppy low end rumble. I give this CD 8.8 out of 10.  [ END ]