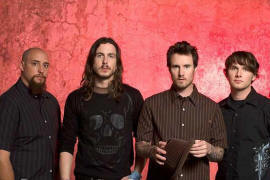 The English dictionary defines the following words as: Idle: lazy, indolent, not in use, unoccupied, purposeless. Son: male descendent or inheritor of a quality. While at first glance these two words would not seem to have anything in common, when put together, they make a pretty damn good Canadian rock band. The Idle Sons as they are formally known hail from the town of Burlington, Ontario, a suburb located in between the cities of Toronto and Hamilton. The band is just now beginning to receive some major national and international attention after landing a major label contract with a significant record company, but it has been a long and hard road towards stardom for the four members, one that included a botched record deal, a world famous record producer and a lot of hard work.

Long before the mainstream success the band is currently experiencing, the members of Idle Sons were four kids from the Burlington area who liked rock and roll music. Lead singer Mike Eastick and lead guitarist Sean Kelly met when the two were placed on the same line on their hockey team. Bassist Bruce Nicol and drummer Ryan Barkwell happened to meet in a similar fashion when the two crossed paths on the same baseball team. Eventually, the four of them met and started talking music and it became clear that they all possessed similar musical tastes which led to the formation of a band ridiculously named slurpymundae. Under this silly tag, the band released a couple of EPs and even an album before realizing that if they were going to have a successful career, they were going to need a cooler, more marketable name. This led to the name Idle Sons which the band started going by around the year 2000 and with the help of fellow Burlington band Finger Eleven, the band recorded a three song demo tape which landed them a major label album deal.

At this point, everything seemed to be looking up for the Idle Sons as the band recorded their major label debut titled Hell or High Water over a six month period in Los Angeles. But then an unforeseen merger between the record label and an internet company occurred leaving the Idle Sons without a deal or an album thanks to a full-scale housecleaning by the new bosses. This unfortunate turn of events left the band in a bleak position and for a short time, the members considered packing it in for good.

Fortunately, the members of Idle Sons decided to soldier on, playing as many shows as possible and continuously writing new music. At one particular show, some record company people in attendance happened to remember seeing the band a few years prior which led to some meetings and the band signing a new recording contract. Armed with a new record deal, the band got a huge break when they were able to secure the services of super producer Garth Richardson (aka gggarth) to help them on their new album. Richardson, famous for his work with Rage Against the Machine, Chevelle and others, helped keep the group focused through an intense and concentrated three week recording session. Richardson’s main goal was to capture the band’s live energy which meant doing away with a lot of today’s modern studio technology.

The result of the band’s hard work with Richardson is their debut full length album Sixteen Seasons. Of the twelve songs that make up the disc, four survived intact from the never released Hell or High Water, another four were reworked from their form on the same never released album and the last four are completely original and brand new. Since its release, the Idle Sons have been receiving positive reviews for their work on Sixteen Seasons, something the band must be pleased about after all the adversity and uncertainty they have had to endure. The band has non-stop touring planned for the next several months so be sure to check them out and support a solid Canadian new rock band.  [ END ]