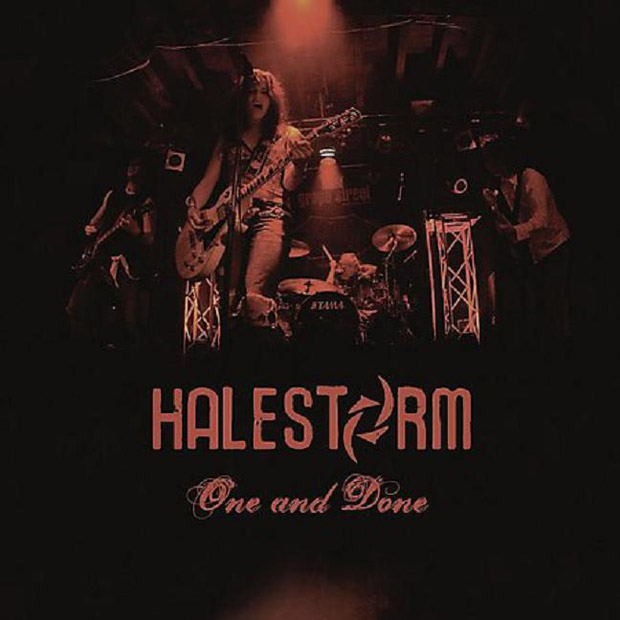 Halestorm hail from Pennsylvania in the US and just last year signed with major label Atlantic Records. It’s taken a while however as these guys are not some new band success story. They’ve actually been writing and performing original music since the mid 90’s, formally setting up in 1997. The band started to become nationally noticed when they toured with Seether, Shinedown and Flyleaf from January to March 2006.

Halestorm have never produced anything more than an 8-track CD which is very disappointing as they really could achieve success with a proper album. Halestorm may not sound amazingly original, but they do have an element of originality with their amazingly powerful vocalist, Lzzy Hale. Lzzy is clearly the driving force behind the band and creates the recognizable sound of Halestorm. Without her this band would be nothing.

This 5 track EP is taken from a live show at Grape Street in Philadelphia on the 13th of August 2005. The sound quality of this EP however, is almost studio quality and the utmost care has been taken to get a great sound from what is a truly great band.

The Live EP starts off by boasting the sheer power and beauty of Lzzy Hale’s voice as she sings alone introducing the EP’s first song called “It’s Not You.” As Lzzy Hale sings “And It’s Not You” the guitars drive in and the show gets underway. The verse creeps in and then the catchy chorus gets you singing along with a couple of listens. A bridge comes along with a snazzy solo following and really adds great power to the final chorus.

“The Hand” doesn’t bring the success to a halt and very much continues it. A nice bass driven verse drives into a very catchy chorus all due to Lzzy’s vast, fruitful voice, capable of reaching notes, high and low. A nice palm muted guitar builds up the last chorus which again adds real power to the end of the song.

“Show Me” quietly converges from the mist and the bass line thrusts in with Lzzy’s voice harmonizing which builds up the song to a classy start. Again the song has a catchy chorus just like the previous two songs. The last chorus is very powerful and quite simply beautiful with Lizzy’s voice.

“Blue Eyes” is a nice song which stops the EP from all sounding the same. It has a slower tempo which creates a good interval between all the songs. However after the second chorus the songs livens up and a solo follows the rocky bridge and Halestorm once again finish the song in a powerful way.

“Takes My Life” is the last song and is no different to the other songs again with a nice bass and vocals only first verse. However the song livens up and a nice little solo follows the first chorus. Once again this song has a great ending, which is very powerful and liberating. However it lacks that melodic hook that Lzzy has managed to conjure from the previous songs and makes this song a little disappointing. Although good, it lacks the catchy chorus that makes you want more.

I’ve talked a lot about Lzzy Hale’s vocals without much mention to the other band members. Jale Hottinger is the lead guitarist and has some very catchy riffs and boasts many brilliant solos which never sound out of place. He is an accomplished guitar player and without him the band would be much misfortuned. Josh Smith is the bassist and is one very good bassist. He holds the songs together and helps create the quiet-loud-quiet-loud structure to the songs. Hottinger fires in with the quick guitar intros and Smith keeps the song flowing afterwards keeping Lizzy’s vocals in time. Arejay Hale is the drummer and although he doesn’t stand out as much as the other band members, he does play the vital job of keeping the song together and also helps structure the quiet-loud-quiet-loud structure.

Overall, this band is original, catchy and hard rockin’ and I think with a bit of promotion from their major label Atlantic Records, they could find themselves with a lot of success. I don’t see why they can’t achieve mainstream status and I for one will definitely buy their debut album if they ever make one. This band can be loved by a wide range of people, as it is light and heavy rock and never really goes “too light” or “too heavy” as many people often complain. These guys are generally very good which is why this EP gets a 9/10.  [ END ]