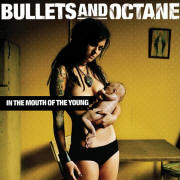 This is one of those bands that have a lot of fans, who’s starting to leave a mark; it’s just not indented in full force yet. Yes, they have hordes of groupies (I am not one of them), who feed off their sleaziness, but these guys can rock the fuck out. If you haven’t heard of them, you’ve been living under a huge rock.

This is also the band’s first major debut album, and I’m sure a hefty tin of grease was allotted in the making of the record. I bet they even got a few wife beaters throw in for extra credit.

The music is in your mother fucking face, it rocks, and it’s metal-like and can take you to a musical level you have never before reached… a musical orgasm that is! Did I just say that? Sorry it’s slipped… I was just looking at their pictures….

Hard pumping drums, gritty vocals, and rock n roll derived guitars is what In the Mouth of the Young is all about. It’s well produced and well polished, and that could be attributed to the fact that producer Page Hamilton had something to do with it. If that name sounds familiar, it’s because he’s a Helmet head.

The album also includes your typical melodic tracks. Although lead vocalist Gene Louis has a distinctive voice, clearly you can see where the real talent shines, in those hard-hitting tunes.

Genuinely a rock and roll album! Their good looks might have you looking, but it’s their hooks that will keep you coming back for more. They get you excited, and the album carries very few low moments. You just want to rock out to the music over and over again.

This is on of those rare albums that you have to get, and keep on listening to for a long while. Pass it on to a friend and say, “dude bud, this is a band you have to check out!” And if you need to compare them to anyone, compare them to Avenged Sevenfold, but just a bit sluttier!? Live in Toronto, Canada? They hit the Molson Amphitheater August 28th and go check them out live. They’ll be sure to tickle your fancy.