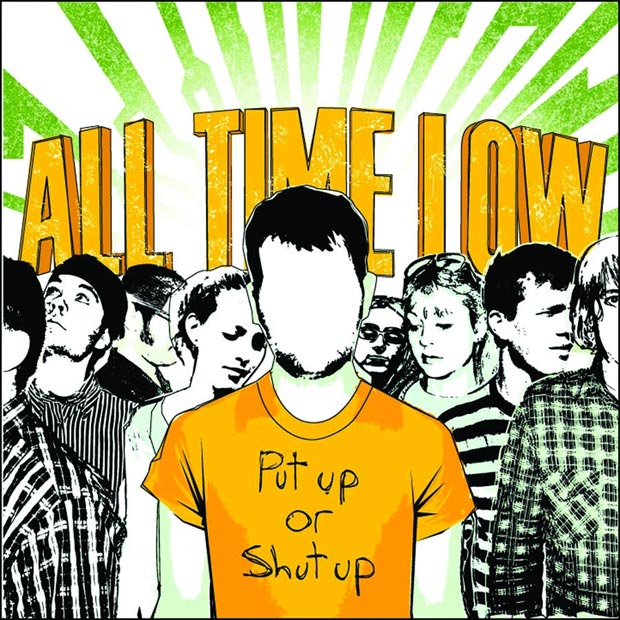 The Lutherville Timonium, Maryland band All Time Low reveals there new EP, Put Up or Shut Up. They’re an act in such a style that it’s like a wild party in your sister’s pants, with a total resemblance to bands like Fall Out Boy and The Starting Line, however, that is an overly simplistic conclusion to reach. The band does not establish itself as a wholly disparate entity by any means, but that is not the name of the root game here, really. All Time Low most certainly gives the “what’s up?” head-nod to the scene heavyweights, but tosses in plenty of proprietary flair to earn due respect.

Vocally, Alex Gaskarth ebbs and rolls into Patrick Stump-esque lowered verses (“The Girl’s a Straight-Up Hustler”) and also lets his notes resonate with a poignant quiver a la Will Pugh (“Coffee Shop Soundtrack”), but he so seamlessly switches between these perspectives unlike either of his predecessors. Likewise, the rest of the band dutifully alternates between frenetic, punkish urgency and crunchy, bouncy anthemics in a way that is artfully fractured, yet entirely accessible.

And thankfully, with regards to lyrics, All Time Low eschews the angsty, faux-irony of the Fall Out Boys in the scene, but instead imparts an optimistic, almost tongue-in-cheek, playful confidence that perfectly reflects the band members’ ages and stations in life and the industry. Stanzas in the songs are not exactly going to make Daniel Webster fear for his place in history, but they sure are amusing enough to sing to, and poetic enough to make discerning listeners not feel wholly ashamed for doing so.

Sound-wise the CD is great; everything is perfect as perfect can get. The mix is awesome, the guitar tone is pretty bad-ass for a pop punk band, the drummer is super tight and makes this act called drumming look so easy, and the singer is in pitch the whole time while the bass lines are thicker then molasses.

When the record stops playing, and you step outside the music, (“Running From Lions”) in most instances the disc will appeal to older fans of the band, but really, this whole recording is a bone thrown to reel in newcomers to the All Time Low camp. Whichever faction you may consider yourself a part of – longtime follower, fresh fan-boy, or impartially ignorant, you’d do well to pick up Put Up or Shut Up before this band is absolutely huge.

All Time Low is not reinventing the wheel or curing cancer or whatever, but this is the catchiest pop-punk EP released since Newcastle, Ontario’s One Second Too Late released From The Moon Down, and also serves as a shining indicator of a young band’s limitless future. When you consider these guys are barely old enough to buy cigarettes, the only place left for them to go is up. I give this CD 7 out of 10.  [ END ]