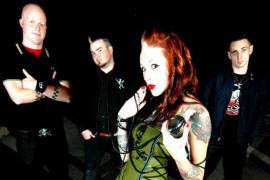 Interview with The Creepshow bassist Sickboy

Hitting up the world with a dash of horrorbilly punk is Canada’s own The Creepshow. The band hails from the heart of Toronto and the GTA. For only a year and a bit The Creepshow have been around, but have a steadily rising fan base, and are usually found on tour. The newest album, Sell Your Soul has just dropped, after quite the delay I might add. But fans should all agree that the wait was well worth it. Sell Your Soul is armed to the teeth with rock along anthems and ridiculously catchy music. After just coming off a tour with The Matadors, I got a chance to ask The Creepshow bassist Sickboy a few questions.

So you’ve been on tour promoting your debut album Sell Your Soul with the Matadors. How was the tour?
Sickboy: The tour was incredible… every show was packed and to our surprise tons of people already knew the songs and were singin’ along, we had the best time EVER! It’s also great to tour with a band that you wanna watch every night, and that you get along with so well!

On tour promoting it, the album in stores soon, does it all feel like it’s really coming together well for the band right now?
Sickboy: Yes! Finally! Although we’ve only been a band for just over a year… and things have gone so fast, it finally seems like everything is falling into place.

The album itself I have to say sounds very dope. What was the reason for the release date delay?
Sickboy: Hmmmm, that’s a good question… there were a ton of reasons that were out of our hands once we delivered the masters… mostly to do with the artwork, and manufacturing… just little problems that needed to be fixed… and did… it’s worth the wait… trust me.

The cover of Sell Your Soul looks awesome! Was it inspired by any in particular horror movie? Because that was the original impression I got when I saw it.
Sickboy: We first decided to call the album ‘Sell Your Soul’ and thought the image of us holding the scroll would be perfect. Our good friend Ashlea Wessel from Revolver Photography brought the idea to life… it turned out so much better than I had pictured it.

Who did you work in studio with to record Sell Your Soul and how was the whole experience?
Sickboy: We recorded with a guy named Steve Rizun… I had heard of him through some other bands that I knew and was played some new demos that he was working on that sounded awesome. We immediately contacted him and did 2 songs in one night to see how we worked together… we had a blast and they sounded exactly how we wanted them to sound, so we all agreed that he was the man to do our record with. We started recording on February 10th and finished about 3 weeks later. We are very happy with the way it turned out!

Are there any goals that you all would like to collectively achieve in the either later or near future?
Sickboy: I think the only goal in this band is to have a good time. Too many bands take themselves too seriously these days… I think things are going so well for us because we’re just in it for fun, and we have a blast playing shows… and I think that shows on stage.

What’s your hometown scene like?
Sickboy: Our hometown scene is very supportive. It seems to keep growing, and growing, although like many scenes, it is over-run by emo-kids… but we are slowly converting them one by one… mwua-ha-ha!

Would you consider your fan base to be very dedicated yet?
Sickboy: I would say so. The ones that were there since the beginning seem to keep on comin’ back! We’re still relatively new, so I guess we’ll see….

There are a lot of bands out today that make music for the sole purpose of money. How cool is it to be able to make your living off of music from doing it for the love of the music?
Sickboy: Hmmmmmm, once your band becomes a job… that’s when you need to quit. All of us in The Creepshow still need to have other jobs outside of the band to make ends meet. We are nowhere near living off this band… it’d be awesome to do this for a living as long as it is still this much fun. But I’ll take it either way.

Thanks for the interview, any last shout outs?
Sickboy: Thanks! Check out our website www.thecreepshow.ca or www.myspace.com/thecreepshow and come see us live when we play a town near you!  [ END ]