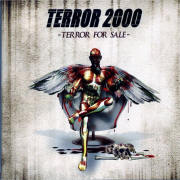 The forth album from Sweden’s own Terror 2000 is now finally in stores! This CD is called Terror For Sale and this disk is so heavy in so many ways. The way that they mix the old school roots of “balls to the wall metal” and the new school metalcore stuff is so well done that it just gives Sweden another thumbs up for their flourishing metal scene. If you’re a fan of the band Soilwork then I think you would be very interested in checking out this band… especially seeing as the lead singer Björn “Speed” Strid is the frontman for both bands. This is what I would call his more Thrashy approach to metal.

Terror For Sale starts off with a direct hit to the face with the song “Five Star Prison.” This song is something you could definitely rock out to all day and night. The band has an “In Flames” feel to them for sure and they do it very well. So well in fact that they are on the same record label, Nuclear Blast.

Furious and extreme, their debut was followed by Faster Disaster in 2002 and then the Slaughter In Japan live album in 2003. Erik Thyselius of Construcdead replaced Henry Ranta behind the drum set and these thrashers have come through once again to kick us in the face with this new and improved CD, Terror For Sale.

This is great stuff; aggressive, thrashy, fast, crisp and solid, and boasts excellent guitar riffing, solo work, lightning-speed drumming, and solid bone-shaking baselines. As far as vocals are concerned, Bjorn Strid defends and holds up his nickname “Speed” with probably the most aggressive singing he has ever done. You can hear the growls perfectly; the 80’s metal vocals are so perfectly in pitch with the rest of the band.

This band has done it once again for sure and in my eyes, after you hear it, I’m pretty sure you will feel the same way. This CD is a must have if your into Thrash Metal. To check out their tour dates for the new release Terror For Sale and for all other necessary band info, be sure to check out there web site.

This CD has 12 tracks that will blow you off your feet. It is fast and aggressive from start to finish and has a ton of kick-ass songs on it. My personal favourite (that I would like to recommend) is the track “King Kong Song.” It’s dedicated to Slayer’s Kerry King and has such a good vibe all the way through. The change up’s in it are intense and the guitar licks are totally bad ass. This CD is one of the best Trash CDs I’ve heard in forever. I give this CD a 9.8 out of 10.  [ END ]