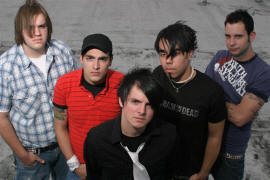 Our Finest Hour: “Not Just A Band Name”

There is really no clear answer, but for decades now ever since rock music became popular, people have debated about what are the main ingredients for a good rock and roll band. Is it technical precision and musicianship? Is it flashy production? What about appearance? All of these things can be important, but what about bands like the Ramones who made up for their somewhat limited technical talent with style, passion and attitude? Although musical skills and a cool image are certainly key elements for any successful rock group, it is ultimately the heart, energy, and attitude which will set a group apart from others. One band that encompasses all of these important elements is the Brooklyn, New York quintet known as Our Finest Hour. Although Our Finest Hour has not yet become a household name among fans of new rock and metal music, the band has been quickly picking up a ton of loyal listeners and critical interest around North America (quite a remarkable feat for a band that has existed for barely two years and is comprised of five guys barely in their mid-twenties).

Quite similarly to so many other great bands before them, the members of Our Finest Hour came together really for one plain purpose… fun. The group’s founding member, guitarist James Brady, had a couple of simple objectives in mind when he felt the desire to start a band: to make music that he enjoyed, to get rid of the aggressions of everyday life and, to have fun spending time with his friends. Bearing these goals in mind, James formed Our Finest Hour in 2004 and the band soon thereafter began playing various gigs around Brooklyn. By 2005, the group was beginning to develop a strong local following, but it would be later that year (when a random copy of their two song demo tape just happened to fall into the right hands) that the band would get their first huge break.

Towards the end of 2005, a DJ at KROQ in California (one of the most prominent radio stations in the United States) got a hold of Our Finest Hour’s demo tape. The DJ was so impressed by what he heard that without the radio station’s approval, he snuck the band’s song “Scars of Desire” on the air. Much to his surprise, “Scars of Desire” elicited a tremendous reaction from listeners and the station was flooded with requests for the song. Needless to say, this fortunate occurrence has helped create quite a buzz for Our Finest Hour and since this incident, the band has been receiving heavy air play on both internet and college radio stations.

The huge hype that accompanied having their song played on KROQ has led to the development of an increasingly large, loyal fan base as well as the recording of a debut EP. The rookie record is entitled A Far Cry From Innocence and is a collection of intense and hard screaming songs that truly captures the essence of the genre referred to as Screamo. To help polish their beautifully rough sound, Our Finest Hour enlisted the services of the talented, up and coming engineer/producer Ted Young. Young is widely considered to be one of the brightest new alternative rock producers in the business, having already worked with the likes of Taking Back Sunday, Social Distortion, Andrew WK, Hawthorne Heights and believe it or not, Cindy Lauper. Young’s work and influence is extremely noticeable on A Far Cry From Innocence, as the band now sounds much more like polished veteran musicians rather than a small indie group at the beginning of their carrier.

The band’s first single (and title-track) off of the aforementioned EP Scars of Desire, has been doing tremendously well as it has consistently been one of the most listened to songs by an indie band on MySpace.com. The release of “Scars of Desire” as a single has also resulted in Our Finest Hour’s first ever music video. Not only did the group land a big name to produce their record, but it would also lead to the opportunity to work with prominent music video producer Kevin Custer who, besides Our Finest Hour, has done a video for Zombie Apocolypse, has had one of his videos on a DVD from Victory Records featuring up and coming directors, and has also done videos recently for Ligeia, SubZero
and Antilove.

All in all, it seems as though the finest hour for Our Finest Hour is quickly on its way. For a band that has existed for hardly two years, these five Brooklyners have made some significant strides towards making it huge. Currently, Our Finest Hour is playing a number of dates on an East Coast summer tour that will see them in a variety of shows in and around New York State and Connecticut (where for one show they will be the supporting act for 30 Seconds to Mars). Be forewarned… keep an eye out for Our Finest Hour in the months and years to come.  [ END ]