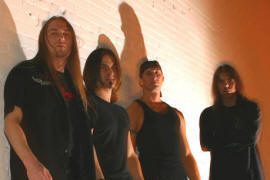 Mastery is an instrumental-only metal band based in Ontario, Canada. Their album Lethal Legacy was released May 16th, 2006 on Spinerazor records. The CD release party was held on April 14th in Toronto. In this interview guitarist Markus Armellini and drummer Kevan Roy describe how Lethal Legacy was created, their expectations of the album, and the possibility of acquiring a lead singer.

You guys couldn’t find a singer, and you decided to remain instrumental. So my question is… is it in your future to find a vocalist, or do you plan on remaining instrumental?
Kevan: Well it kinda worked out, I mean it was really sort of by accident that we ended up instrumental because we had been doing auditions and you know, kinda just from finding the sound we were looking for and we really got so busy with the writing and getting ready for shows and stuff, it just kind of happened that we never found one, so we decided to just go ahead and do it anyway. We went to do some shows and record the CD and the response we got was just awesome, so we kinda just kept doin’ it. And that since stopped the search, I guess you would say, for a singer. That being said, I mean we’re all still of the mindset that if the right person comes along, you know were definitely gonna listen. We’re not hell-bent on staying instrumental necessarily, we’re confident on doing what sounds best for the band, so if that means no singer, then no singer. If someone comes along that can just rip our face off, and make that sound better than what were doing right now, then absolutely. There’s nothing set in stone.

So you’re open for the possibility if they come along?
Kevan: Totally!

Alright, next question then related to that is… has that changed your writing style at all, just being an instrumental band?
Markus: Well I guess it was more just recently, now that we’re working on new material, compared to the few songs that we’ve recorded so far. Those were actually recorded still thinking you know… there could be possibly vocal parts here and vocal parts there. But we’re almost at the next stage where it seems like we sort of made up our minds in terms of okay, like this is just what it is right now, which means were not having a vocalist, and therefore some of the next songs, or next set of songs that were working on are gonna be a bit more directed towards not actually having any vocals on them, simply because it’s a fact that we don’t have a vocalist.

How do you think the fans are reacting to this?
Markus: So far we’re still surprised actually by the reaction we’re getting, because it’s just totally been positive as opposed to, you know, “where’s the singer” or “what’s going on, you getting a vocalist, what’s the deal with that” etc. Absolutely not, we’re getting all positive responses from the fans, and that’s obviously another reason why we’re not necessarily trying to search for a vocalist at this point, so yea we’re just sort of going with the flow just like Kevan said before, and we’ll see what happens, and so far so good.

Cool. Alright, your album Lethal Legacy, what’s it all about, what inspired it, talk a little bit about it!
Markus: Well like I said, it was a gradual process over the last few years, in terms of trying to find all the players. I sort of started the whole thing a few years back, and I just, you know, I had a good direction in terms of I wanted to play some fast stuff, and some heavy stuff, whatever. And it was just tough to find the right group of people, and over the last I guess roughly two years now, the band has finally formed. And yea, the songs that were recorded on the CD, on Lethal Legacy are basically songs that were created in that process. Yea it was interesting simply because we were obviously in the midst of you know, we’re still looking for a vocalist etc. But we didn’t want that to come between us creating songs, so we just went ahead and got it done, and here we are…. So yea man, the faster and heavier the shit, the better!

Do you think then, after having said that, that this album is a true representation of the band and what the band is capable of, or was there something that you wish you could’ve done that you didn’t do in this recording?
Kevan: I think we did exactly what we wanted to in this recording. It’s the perfect representation I think, of where the band was when we did the recording. Especially because, as Markus said we did the recording with sort of the thought that, you know what we might still have a vocalist. And we were going to use the recording to help attract someone on par with what we’re doing. So that’s where we were, and there isn’t really anything I’d change about that. What’s coming next is gonna be the next step, it’s gonna be the next evolution in our writing, in our playing, in our approaching just kind of what were trying to say in our songs I think. So you’re definitely gonna see the next step then I believe.

Great! One more question about that album then… what are you hoping it will accomplish for you, what are your expectations?
Kevan: Well it’s not that we necessarily intended to create a new genre, you know with the whole instru-metal scenario. But yea like I said before, so far we’ve been getting positive feedback now that the record is almost out; actually mid-May is the release date, May 16th. Part of the industry already received the album and we’re getting actually quite a few reviews and it’s sort of confirmed I guess, what we put out to do. Once again we haven’t gotten any negative feedback at all from the album so far, so it’s been definitely more than positive with what we’ve accomplished, more than what we expected anyways at this point. But you know the next few moths are really gonna show what the masses are gonna think of this idea anyway, to have thrash metal basically… you can take that out of the recording, just to stop categorising us! [everyone laughs] But anyways, we’re gonna find out the next few months what the masses are gonna think of our idea that we, I guess started now. But we’re gonna stick to our guns and go to the next level with the next few songs for sure.

Cool, sounds good. When are you guys touring, what’s gonna happened with that, do you guys have anything lined up?
Kevan: Yea that’s basically in the works right now, there’s nothing really confirmed but what we obviously have confirmed is basically the release date which is May 16th and the album gets released across the US and Canada, so we’re basically getting ready right now to hit the road. With whom, or which way were going and how long etc, that’s hopefully gonna be made public soon, but at this points it’s still in the works, cannot really say anything more specific, but the plan is definitely to go out and show people what we’re all about. So the intention is definitely, we’re gonna tour for this CD, as long and as hard as is takes to bring us to the people for sure!

Great! What’s your approach to gigging, what kind of attitude do you have onstage, what do you think is the whole point of playing live?
Markus: Well we’re trying to obviously offer as much showmanship as we can by not having a single frontman, and so we are basically all frontmen per say. So we throw in the drum solo which is really nice, people really appreciate that obviously. And we’re just gonna try to bring out, you know, the headbanging mentality, that’s basically what we’re portraying I think. Yea that’s the main thing right there, we want to share the joy.

That’s what it’s all about right!?
Kevan: Absolutely!

Ok, future plans?
Kevan: Well the immediate future, like we mentioned before, is the record comes out, so we’re gonna be touring for that, and that’s basically 2006 right there. And then next year we’re gonna look at another recording, we’re definitely not gonna start anything this year, just because the record is just coming out. That’s about as far as the future goes. It depends… we don’t know what to expect, we’re getting a really good response so far with this whole instrumental thing, but is this gonna be a quick fad, that people in six months will be tired of it and move on? Or is it something that they’re gonna want to hear more? We have no idea.

So you’re gonna play it by ear basically.
Kevan: Absolutely! And as far as the future plans go, right now our mentality is that once we go on the road, we’re gonna stay on the road as long as Lethal Legacy will carry us, and then we’re gonna hit the studio again and do the next recording and kinda see what goes from there.

Markus: Yea, and going over to Europe obviously, I don’t know if we mentioned that.

Great! Any final words?
Kevan: Go fuckin’ buy the record! Fuckin’ May 16th it’s out! [everyone laughs] And t-shirts!