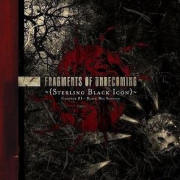 Some of the greatest metal of all time originates from Europe… mainly Norway, Sweden, and Germany. One of the heaviest styles of metal that originated in these areas was Death Metal. With energy pumping, double kicking base pedals and an insane attitude, Death Metal is one of the most intense genres of music period. This being said, one band from Germany falls directly into this category – Fragments of Unbecoming.

Formed in August of 2000 as a side project, the band has released three full-length albums including: Bloodred Tales (Chapter I – The Crimson Season), Skywards (Chapter II – A Sylphe’s Ascension), and Sterling Black Icon (Chapter III – Black But Shining). The band consists of Sam Anetzberger (vocals), Sascha Ehrich (electric/acoustic guitar), Stefan Weimar (guitar/backing vocals), Ingo Maier (drums), and Wolle Schellenberg (bass). Sam wasn’t added to the line-up until this album and for the first two albums only Stefan performed the vocals.

The album opens up with an acoustic melody that entrances the listener. The intro is only 52 seconds long, but it is definitely powerful. It’s easy to listen to and well played. The second track on the album is the title track, “Sterling Black Icon.” With distortion turned up and some mad fast-paced drums, this track would be an amazing mosh-pit song. Sam’s lyrics only intensify the song with his low growls, screams, and powerful lyrics. He sings of misery, dark forces, fantasies, and dreams. Listen to the song if you want to hear how he connects those four ideas.

Track number 5, “Breathe In The Black To See,” is my favourite track on the album. With a cross of death metal, and European thrash metal, this song is the shit. Mad double bass pedals, intense symbols and snares. I don’t even play drums, but I got so into it, that I wanted to go out a get a set just to play this song. The guitar work on the track is melodic and has a sombre feel about it… almost foreboding. I recommend this one 100%.

Track number 7 is “A Faint Illumination.” The intro to this song sort of reminded me of Between The Buried And Me. I’m sure many people will disagree with me, but hey… I’m allowed to have an opinion! The intense lyrics reach the ears and penetrate the soul. “I bleed! Abandoning the sun.” Now tell me that isn’t a moody little line. Kinda makes me feel bad.

The intro to “Onward To The Finger Of God” sort of reminded me of the Death Metal band Nile. The intro sounds somewhat Egyptian and I love it. I love Egyptian-type music; it’s so melodic and easy to listen to. Even if it’s heavy and loud, I find it soothing. This song is a 1:37 instrumental, but is definitely worth listening to. Sure does take extreme amounts of talent to lay a riff like this!

Overall, “Onward To The Finger of God” and “Breathe In The Black To See” were the best songs on the album. I recommend buying this disc for sure… it’s a great choice. Although if you’re into bands such as Seether, I don’t. I give this album a 7.3/10. Great work guys!  [ END ]