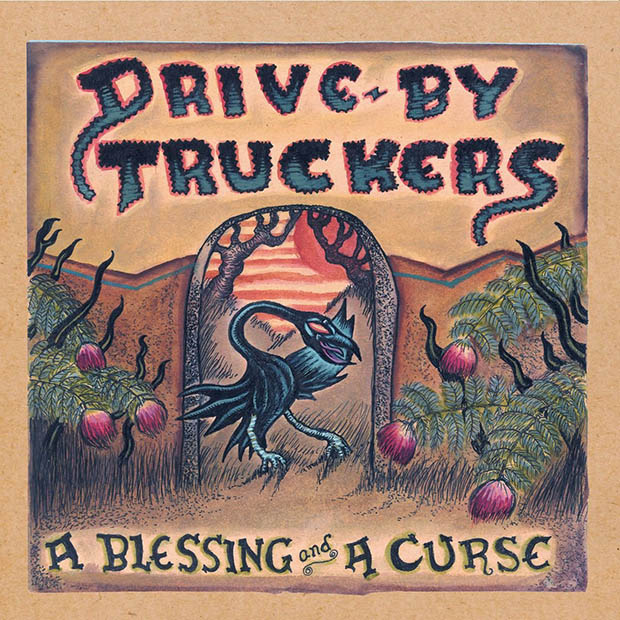 Drive-By Truckers have been around and making music for ages, and yet still no one seems to have heard of them. Somewhere between the Allman Brothers Band and Kings of Leon, they’re a 5-piece of country-fried rockers who are a bit too country to appeal to rock fans, and a bit too rock n’ roll to appeal to country fans. It’s an unfortunate position that Drive-By Truckers are stuck in, yes, but nonetheless they keep on producing passable records (A Blessing and a Curse is their seventh), and there are seemingly people out there who keep on listening.

A Blessing and a Curse isn’t a particularly good record. There are but a few songs that stand as distinct from the rest, but mostly the singer just drones on about lost love and “cigarettes in ashtrays that weren’t her menthol lights” or something. “Easy on Yourself” is an outstanding track, and redeems Drive-By Truckers from their curse of mediocrity… a mediocrity which seems to pervade this album on the whole. “Aftermath USA” isn’t so bad either, but the trite lyrics ruin it slightly, and you get sort of sick of Southerners whining about the drink and the women after a couple of minutes.

The song “Little Bonnie” is actually fucking ridiculous in terms of lyricism, and though the melody isn’t bad, with lines like, “They put her in the family garden/Said you could hear his heart breaking miles away/All the men pitched in and bought a marble angel/To mark the piece of land where little Bonnie lay”; you can tell that it’s meant to be heartfelt and tear-inducing, but unfortunately it has the exact opposite effect on the listener, making one scoff and laugh at the supposed tragedy. Ha. Ha. The title track, “A Blessing and a Curse” is alright and catchy enough, but the fact that the majority of this album is such a travesty cancels out the little bit of good that is to be found on it.

Drive-By Truckers perhaps need to slow down a bit, stop making so many records, and focus on making a good one rather than lots of pedestrian and average ones, like A Blessing and a Curse turned out to be. I’m only left with one question after listening to A Blessing and a Curse through and through, that question being… who the fuck is actually a fan of this band?  [ END ]