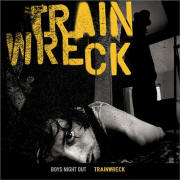 You can feel it from the opening notes of the first song; and it doesn’t matter if you’re intimately familiar with Boys Night Out or you’ve never heard the Burlington, Ontario group’s music before now. From the second the band’s sophomore album, Trainwreck opens with its cascading instrumental overture and its eerie voice-over of a physician diagnosing his patient, you can sense the arrival of something big, powerful – and where this band is concerned, previously unexplored.

The lyrics to the songs are typed up with no song names in very small print. You are reading a story about the guy the doctor was describing at the beginning of the CD, and every song is a stage in his life over a period of time. I tried to follow the lyrics while I listened, but this is when I discovered just how multi-faceted this album truly is.

There are all kinds of things being said or sung in the background that are really hard to catch at times. Some are just audible enough to understand, others are part of the song lyrics, yet others are random words. Above all, the way the vocals are made to fit the music is quite astonishing and VERY difficult to follow along while trying to read the lyrics… at least until you get the gist of what is happening. I found this the case especially in the songs “Dreaming” and “Waking,” the first two on the album.

This album sounds very good on any CD player, it’s punchy and the bass isn’t too loud or too low… it’s just perfect. The drumming is very basic like it always has been, but something this time makes it a bit catchier. I think it’s probably the toms being triggered this time and not just mic’d. The over all sound is RAW but good enough to sound pro.

Towards the end of the album, new keyboardist/vocalist Kara Dupuy ends up playing the part of his wife, and there’s two clear instances of The Patient believing he’s hearing her voice in his head: “Relapsing,” in which Dupuy sings the chorus in a near-Denali / Bright Eyes-esque, acoustic-dependent (the latter more so in the first half of the track) setting, and “Disintegrating,” in which she convinces The Patient the only way to conclude the song is through The Doctor’s death.

Trainwreck is a surprise full of surprises. It’s a dark and morbid tale exploring the intentions and actions of a deeply troubled man, and the drastic consequences that can occur simply from trying to write a song. Granted it’s a rare, hyperbolic scenario when stated simply as such, but whole-heartedly imaginable when carried by an assorted range of styles and affectations bundled inside a package as cohesive, riveting, and picturesque as the story is alone. I rate this Album 7.7 out of 10.  [ END ]